A couple of days ago, we reported that Huami might be planning to launch a bunch of new wearables under its Amazfit lineup. We’re talking about the Amazfit GTS 2, GTR 2, and Neo. Well, we’re now again hearing about the Amazfit GTR 2. The smart wearable has now appeared on the Bluetooth SIG listing for certification. Here’s what the new development reveals about the product. 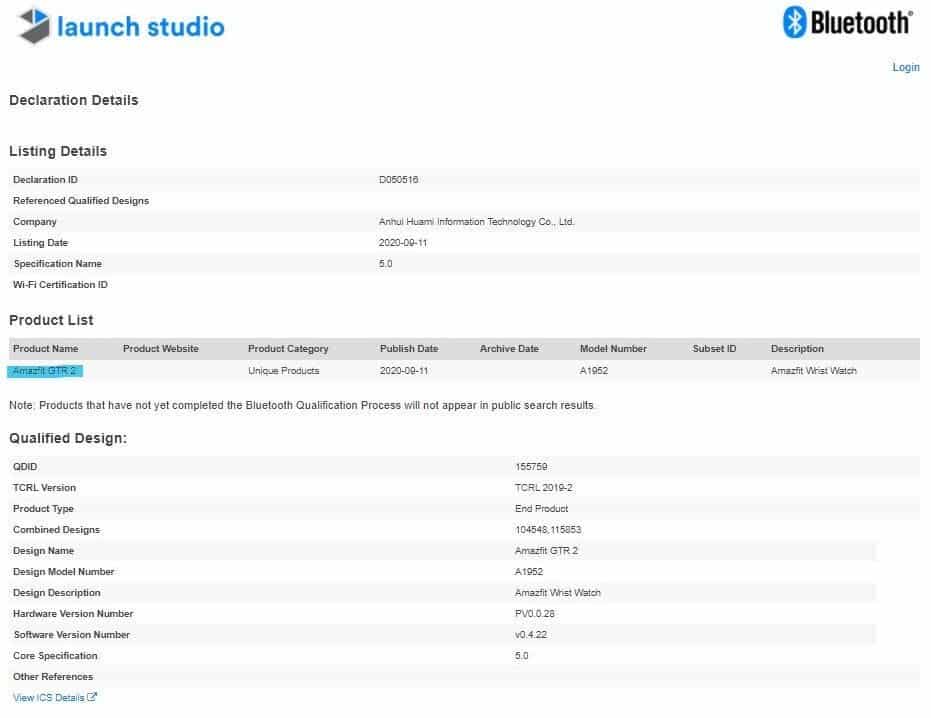 According to the listing, the wearable will arrive with a Bluetooth 5.0 for connectivity. It also carries the model number A1952. The listing clearly mentions the Amazfit GTR 2 as the product name. Sadly, the Bluetooth listing never tells us about anything else and it makes sense considering the certification is only for Bluetooth connectivity.

This is not the first time we’re hearing about the wearable. According to previous leaks and rumors, GTR 2 has an internal codename Lisbon. It is expected to arrive with a round AMOLED display panel following the design of its predecessor. It will also be available in two different sizes. Some leaks have also pointed towards an inbuilt Amazon Alexa assistant for the international version. We should see more sports modes, an improved heart rate sensor, and a SpO2 monitor as well.

As mentioned earlier, Amazfit seems to be working on a bunch of other products as well. The Amazfit Neo has a codename Tokyo while the GTS 2 has a codename of Newton. The Chinese wearable maker is also working on its Amazfit Smart Scale that has also received its Bluetooth SIG certification.

Since Amazfit GTR 2 has now appeared on the Bluetooth listing, it is safe to assume that the wearable is inching closer to its official debut. If that’s the case, then we should be hearing more about the product in the coming days or weeks.