Three new devices with codenames “Newton”, “Lisbon”, “Tokyo” for the Amazfit GTS 2, Amazfit GTR 2 ann Amazfit Neo respectively have been spotted in the code. This would be the first time, we are receiving a confirmation about the upcoming Amazfit smartwatches. The leaked information was provided by a tipster named Magical Unicorn in the forum GeekDoing.

According to the leaked information, the Amazfit GTS 2 will come with the support of several voice assistants; as a few other smartwatches from the same brand already have support for Alexa; such as the Amazfit Verge and the Amazfit Band 6, and it is quite possible that this may be the same case with the  Amazfit GTS 2. 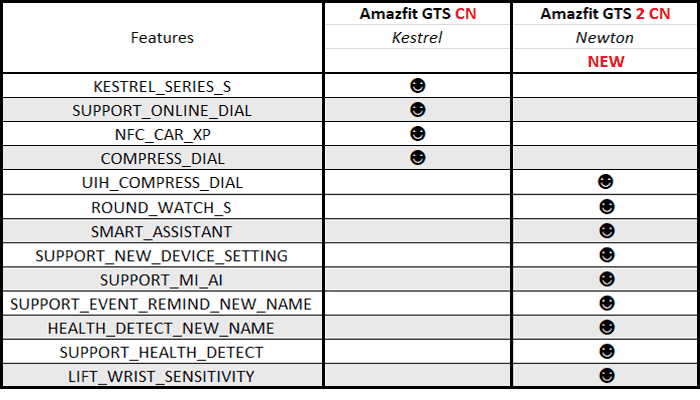 Additionally, the Amazfit GTS 2 will also have the support of the voice assistant from Xiaomi; named as XiaoAI at least in China. The integration of this assistant would not come as a surprise; as Huami does manufacture smart bands for Xiaomi and more. Amazfit GTS 2 would be packed with additional new features including health monitoring, exercise modes and more. The mysterious Amazfit Neo will probably debut along with the announcement of the GTR 2 a GTS 2. However, there is not much of info on the smartwatch available right now.

To recall, the Amazfit GTR’s 47mm variant has a  screen size of 1.39 inches, supports NFC as well as Alipay offline payment. The rest of the features, include 5ATM waterproofness, GPS+GLONASS dual star positioning, air pressure sensor, BioTracker PPG 24-hour uninterrupted accurate heart rate monitoring, and other amazing functions. the Amazfit GTR 47mm stainless steel and aluminium alloy versions are priced at 999 yuan ($145), while the titanium version is priced at 1399 yuan ($203).