Xiaomi is currently working on its Redmi K40 series after the long extension of the Redmi K30 series. While nothing is official regarding this device, speculations are beginning to hit the web. Earlier today, Apple officially released its new Bionic A14 chip. The A14 processor uses the 5nm process technology and has a 6-core CPU and a 4-core GPU. Talking about 5nm chips such as A14, Redmi product director, Wang Teng, said that the supply of 5nm processors will be tight next year. This tight schedule will be basically due to capacity constraints. 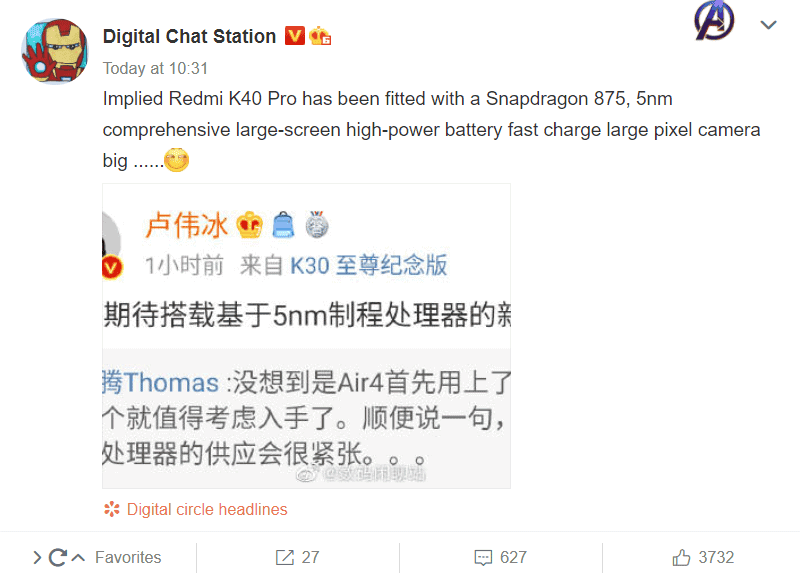 Subsequently, Lu Weibing, vice president of Xiaomi Group, president of China, and general manager of the Redmi brand, hints that new products with 5nm chips are on the way. In this regard, popular Weibo leakster, @DigitalChatStation, claims that Lu Weibing is referring to the Redmi K40 Pro. He further claims that the Redmi K40 Pro will come with the 5n Snapdragon 875 SoC. Furthermore, this smartphone will use a full-screen display, large battery, high-power fast charging, and large pixel lens.

Of course, this device will come with other features that we do not know about for now. This will be one of the earliest Snapdragon 875 models. This smartphone will probably hit the market in the first quarter of next year.

Its predecessor, Redmi K30 Pro uses a Qualcomm Snapdragon 865 SoC as well as a pop-up camera. It makes sense for the Redmi K40 Pro to use the Snapdragon 875 SoC. However, it appears that this device is too early for the on-screen camera solution. Nevertheless, it is right on track for Xiaomi’s new fast charging technology.  Since the Redmi K30 Pro arrived in March last year, we expect its successor to arrive at about the same period.

According to reports, Redmi K40 is coming later this year and will run the Snapdragon 775 SoC. Again, Digital Chat Station claims that this device should go on sale by the end of 2020, around the fourth quarter, and the Snapdragon 775 processor will form the basis of the device. This means that the K40 will arrive a few months earlier than the Pro model with a Snapdragon 875 SoC.

These are only speculations and there is no official confirmation for now. We hope to get more information regarding this series in the coming weeks.