There have been reports that the arrival of the Huawei Mate 40 series is facing some uncertainty. However, in a recent turn of events, Huawei’s consumer business CEO, Yu Chengdong, is reassuring netizens. According to him, “Please wait a moment, everything will arrive as scheduled”. Now, there are reports that this device has gotten NBTC (Thailand) and the Eurasian Economic Commission (Russia) Bluetooth certification. 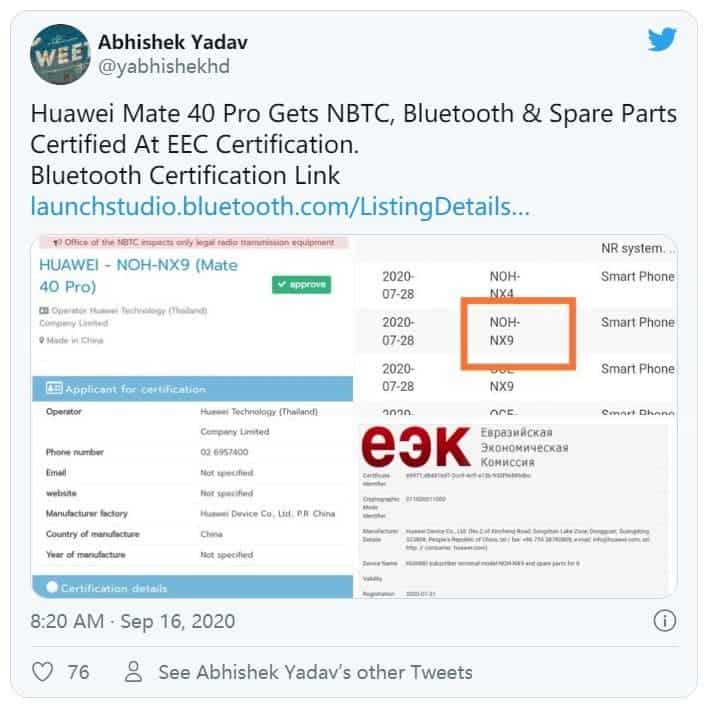 In the device list, there is a model NOH-NX9, which is believed to be Huawei Mate 40 Pro. The same model also appeared on Bluetooth Launch Studio. While we are still dealing with the Mate 40 series delay rumors, Huawei seems to be proceeding with certifications. These certifications suggest that this series may arrive soon.

If the Huawei Mate 40 series arrives on schedule, then it should launch this year. Although there are reports that the Mate 40 series will not be available until next year, the company will at least release a smartphone in China sometime next month.

According to @鹏鹏君, Huawei Mate40 series might hold a global conference in mid-October. The company will release HiSilicon Kirin 9000 series SoC before then. In addition, he also said that there is news that Huawei Mate40 may use 7nm process Kirin 9000E chips, but the other two models will still be equipped with 5nm Kirin 9000 5G chips.

Previous Redmi K40 Pro to use the 5nm Snapdragon 875, high-power fast charging, and a large-pixel lens