It is already official that OnePlus will release the OnePlus 8T 5G smartphone sometime next month. According to speculations, this smartphone will arrive on October 14th. In a recent pre-heating video, there are indications that there will be a OnePlus 8T Ultra version. The title of the video is “OnePlus 8T – Ultra Stops at Nothing”. Furthermore, this phrase “Ultra Stops at Nothing” appeared in the video several times.

In addition, OnePlus described in the video introduction as “The next addition to the OnePlus line up is ultra-smooth, ultra-fast and all things extreme”. This implies that OnePlus product line will introduce a brand new model. Of course, there are speculations that the “Ultra” name is most likely.

Earlier this month, there were reports that the OnePlus 8T series will cancel the OnePlus 8T Pro model. However, it now appears that it will replace the “Pro” model with the new “Ultra” model. 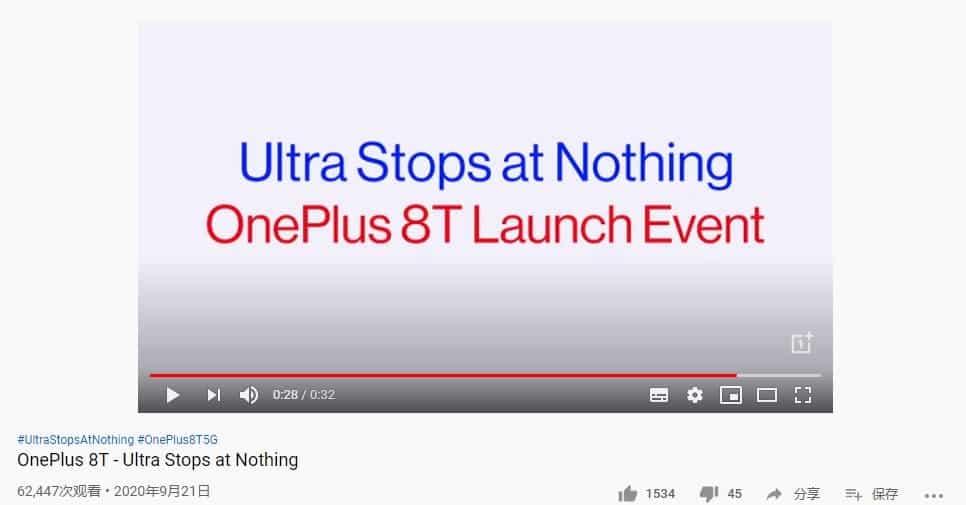 In recent years, many manufacturers have adopted the “Ultra” naming method for top models. We have seen the likes of Samsung Galaxy Note 20 Ultra, Xiaomi Mi 10 Ultra, and so on. Therefore, it cannot be ruled out that OnePlus will add the OnePlus 8T Ultra model.

The front of this smartphone may use the same 6.55-inch display as the OnePlus 8, but the refresh rate is 120Hz. It is reported that a punch hole on the front will accommodate a 32-megapixel selfie lens. On the rear, it will have a quad camera setup. The actual configuration will include 48MP + 16MP + 5MP + 2MP. OnePlus 8T 5G is expected to run on the Snapdragon 865 chipset. There have been rumors that this phone will not use the upgraded Snapdragon 865 Plus. However, the trailer released by OnePlus emphasizes speed, so there is still hope for OnePlus 8T 5G to come with the Snapdragon 865 Plus.