All is set for OnePlus to unveil its latest flagship smartphone, OnePlus 8T. According to the company’s schedule, this smartphone will be official on October 14th/15th. According to popular Twitter user, @ishanagarwal24, the OnePlus 8T will have Lunar Silver & Aquamarine colour options. As shown in the picture, the silver version of OnePlus 8T is gradual gray from a certain angle. It can not only bring people visual enjoyment, but also a long-lasting charm. As for the Aquamarine option, it appears glossy. 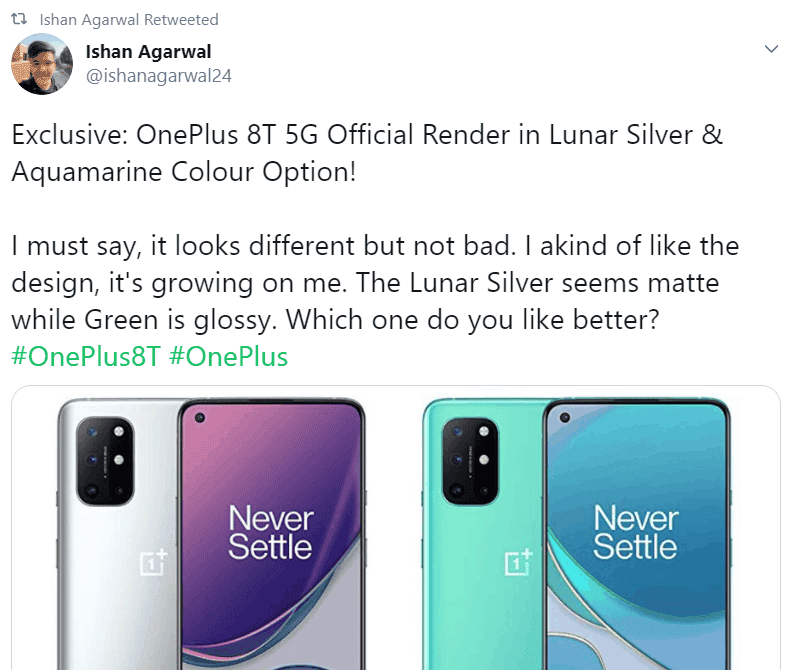 These two colour options seems to capture all kinds of people. Adult males (with some females) will probably prefer the Lunar Silver option. However, teenagers and adult females who like colours will likely choose Aquamarine.

It is worth noting that the thin and light body is another highlight of OnePlus 8T. Its bodyweight is only 188g and its thickness is 8.4mm. OnePlus founder and CEO, Liu Zuohu, said that OnePlus 8T should be one of the few thin and light flagships in the market this year. According to OnePlus, with every new flagship, it reduces the weight of the phone.

“Every time we lose one gram in weight, we have put in a lot of effort and added a lot of cost. Therefore, it is not easy to use and cherish”.

In terms of core configuration, OnePlus 8T uses a 120Hz AMOLED flexible straight screen. This smartphone comes with a Qualcomm Snapdragon 865 flagship processor. It also usesup to 12GB of RAM and supports 65W flash charging. This device will also arrive with Google’s latest Android 11 out-of-the-box. This will be the industry’s first pre-installed Android 11 Chinese flagship smartphone.

OnePlus 8T will use a pretty old camera sensor

It appears that the manufacturer does not intend to create competition with the main flagship of the year. This could be why the OnePlus 8T will receive an outdated IMX586 camera sensor.

This sensor was introduced back in 2018 and is found both in budget devices (like the Honor Play 4T) and in previous OnePlus flagships: 7, 7 Pro, 7T, 7T Pro, 8, and even Nord. The top-end IMX689 sensor will remain only on the OnePlus 8 Pro, while there is no information on the OnePlus 8T Pro camera yet.

At the moment, we do not know how OnePlus plans to explain such a decision. This situation is similar to Google’s approach, whose Pixel line uses the same 12-megapixel IMX363 sensor from year to year. However, it does this because of its unique combination of quality and affordability.