The new Realme Q2 series mobile phones are coming soon and will be officially released on October 13. As far as we know, there will be a standard version and a Q2 Pro edition. Today, the phone has been spotted on GeekBench database. 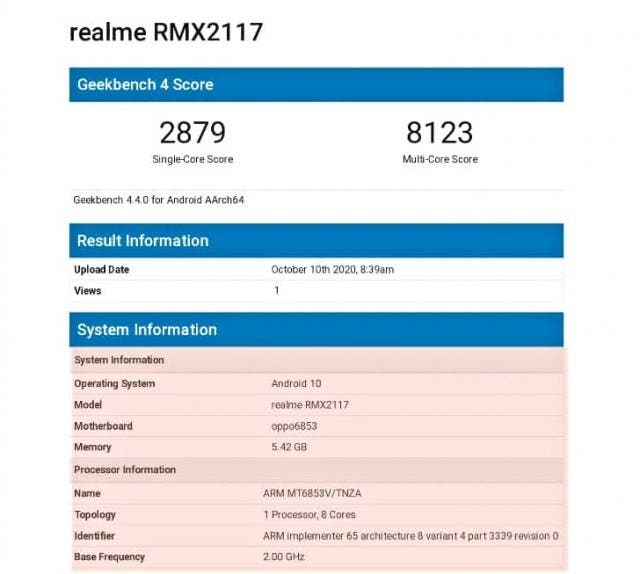 GeekBench showed information about the phone model Realme RMX2117. If nothing accidental, this should be the standard version of the Realme Q2. The screenshot shows that the machine will sport the MediaTek Dimensity 800U processor. This is the lightened variant of the original Dimensity 800, but it still supports 5G networks.

This chip is based on TSMC’s 7nm FinFET process. It is an octa-core chipset, featuring two ARM Cortex-A76 cores clocked at up to 2.4GHz and six Cortex-A55 cores that clocks at up to 2.0GHz. It integrates ARM’s Mali-G57 GPU. For better AI processing and other tasks, the chipset comes with an APU. It supports LPDDR4X RAM (up to 2133MHz) and supports UFS 2.1-class storage.

However, one of the most exciting features of Dimensity 800U is the 5G modem that comes with the budget-oriented chipset. Even for a mid-range chipset, MediaTek has not compromised. The Dimensity 800U comes with dual SIM 5G, dual VoNR (Voice over New Radio), sub-6GHz NSA / SA networks, and 5G two carrier aggregation (2CC 5G-CA). There is a big con with 5G modems, it is the high power consumption. For that, MediaTek has opted for its 5G UltraSave technology.

Xu Qi, vice president of Realme and president of global marketing department, once said that high-end plain leather craftsmanship was applied to the Realme Q2 series for the first time. The new machine uses gray plain leather with the stamped ‘DARE TO LEAP’ phrase.

According to previous reports, the Realme Q2 uses a 6.5-inch FHD+ LCD single punch screen. The latter also supports 120Hz refresh rate and 180Hz sampling rate. The hole hosts a 16MP camera, while the rear comes with the 48MP+8MP+2MP sensors combination. At last, the phone’s battery capacity will be 5000mAh.