This year, it was all about 5G and faster-charging speeds. 5G was made a norm for flagship-level devices released in the first half of the year. Now, it seems that the mid-range smartphones will be getting the 5G capabilities soon. MediaTek has launched a mid-range 5G chipset in its Dimensity lineup. The chipset is MediaTek Dimensity 800U and is targeted at mid-range smartphones. The Dimensity series of MediaTek is popular one for providing the 5G network together with high-end performance. Let’s have a look at what the newest Dimensity 800U has to offer.

The chipset is based on a power-efficient process, which is TSMC’s 7nm FinFET. Moreover, the Dimensity 800U is an octa-core chipset. It features two ARM Cortex-A76 cores clocked at up to 2.4GHz and six Cortex-A55 cores that clocks at up to 2.0GHz. Talking about the graphics juice, it comes with ARM’s Mali-G57 GPU. For better AI processing and other tasks, the chipset comes with an APU. It supports  LPDDR4X RAM (up to 2133MHz) and supports UFS 2.1-class storage.

One of the most exciting features of Dimensity 800U is the 5G modem that comes with the budget-oriented chipset. Even for a mid-range chipset, MediaTek has not compromised. The Dimensity 800U comes with dual SIM 5G, dual VoNR (Voice over New Radio), sub-6GHz NSA / SA networks, and 5G two carrier aggregation (2CC 5G-CA). There is a big con with 5G modems, it is the high power consumption. For that, MediaTek has opted for its 5G UltraSave technology.

Where is the Dimensity 800U Placed? 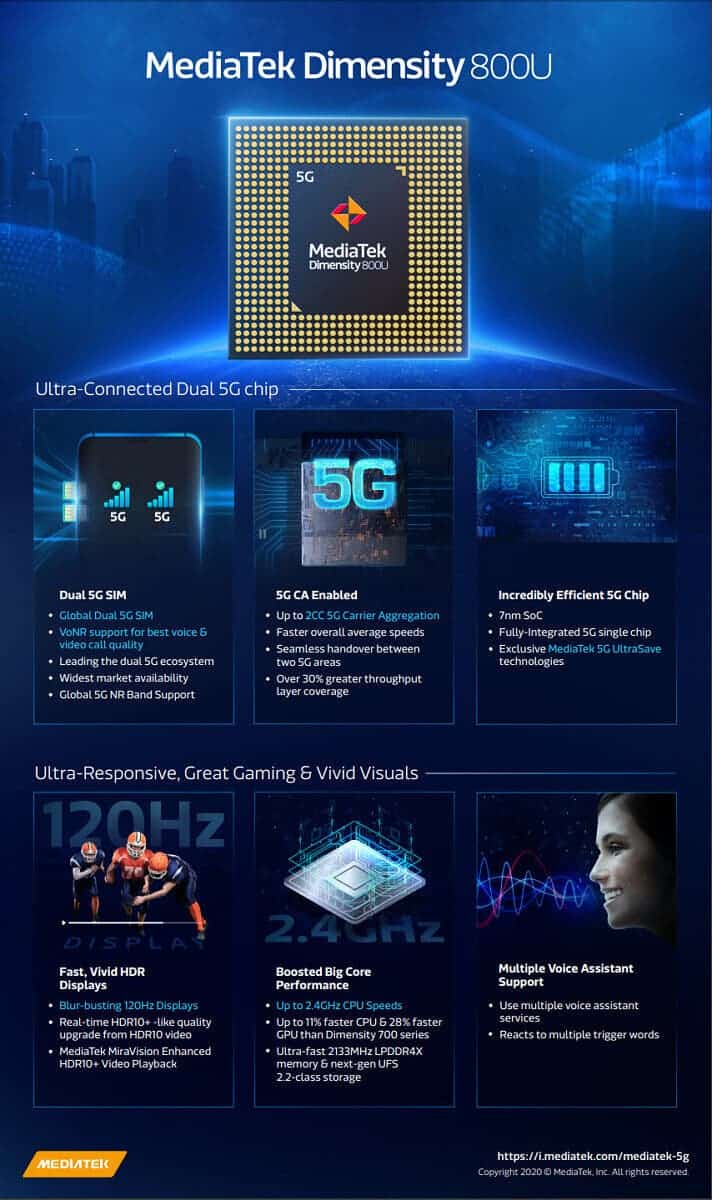 MediaTek Dimensity 800U For Global Markets

MediaTek‘s Dimensity series has been a success. But then it never launched globally. All the smartphones launched with Dimensity chipsets in China came with a different SoC globally. So, the question which arises is will we ever see Dimensity 800U and other Dimensity chipsets globally or it will be restricted to China only? Well, there is good news. MediaTek has officially confirmed that that phones with Dimensity processors will be seen outside of China in Q3 2020. Hence, we may see Dimensity SoC globally soon enough.