Since the beginning of the month, we’ve been seeing multiple leaks about the Vivo V21 series. More recently, a report emerged suggesting the launch of the new smartphones on April 27 in Malaysia and in India. Now, Vivo has finally confirmed that the new Vivo V21 series is really coming. Unfortunately, the company didn’t confirm the launch date.

As per the reports, the Vivo V21 series is composed of a vanilla Vivo V21, a V21e, V21 SE, and V21 Pro. Apparently, only the Vivo V21 will come on April 27. The other devices probably will land at another date, but all this is yet to be confirmed.

Thanks to a multitude of leaks, most of the Vivo V21 specifications are already known. The device is a premium mid-range smartphone featuring powerful cameras and a 5G-enabled chipset. Just like the V20 Pro, the device has a big focus on selfies, for that reason Vivo is bringing a 44MP shooter on the front with Optical Image Stabilization, something that isn’t usual.

And the legacy of vivo V-Series continues! Presenting our two "Very Special" Vs in one frame 😊. Stay tuned for more on #vivoV21. #DelightEveryMoment pic.twitter.com/na7UoPXf9D

According to the leaked specifications, the Vivo V21 will also come with an Eye Auto Focus feature on its front-facing camera. Unlike the Vivo V20 Pro, the phone has a single-camera solution and will not bring a wide-notch solution. Instead, we’ll have a more conventional waterdrop notch.

Moving around to the back, the phone will pack a Triple-camera setup. It comprises a 64MP primary camera that also boasts Optical Image Stabilizations. The secondary sensor is an 8MP ultrawide snappier allowing you to take “groupies”. Last but not least, we have a 2MP macro module. The phone is likely coming with Android 11-based Funtouch OS 11 which includes a set of features to improve photography. 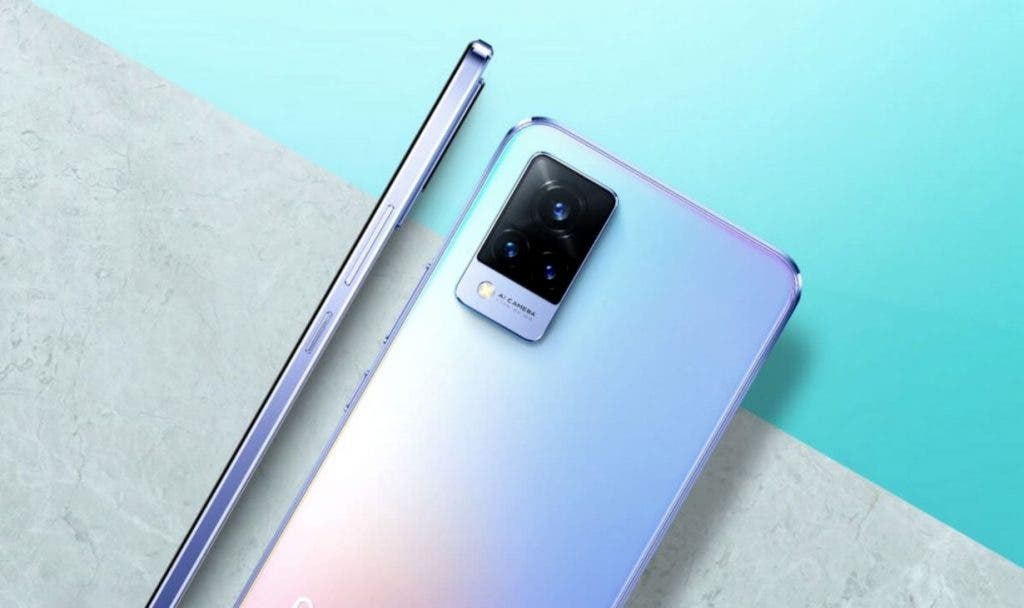 Under the hood, the new smartphone will pack the MediaTek Dimensity 800U chipset. This chipset isn’t particularly new, but its availability outside of China has been somewhat limited. So it’s good to see more mid-ranges coming with it. The phone will come with at least 8GB of RAM and the virtual memory RAM feature will be adding an extra 3GB of RAM through software. This extra RAM takes a portion of your internal storage. We assume that the phone will have at least 128GB of internal storage, but a variant with 256GB isn’t discarded.

Vivo will sell this device as one of the slimmest 5G-ready smartphones. According to leaks, it will be 7.29mm slim, hopefully, the race for this slim profile hasn’t sacrificed the battery. The V20 Pro, for example, came with a 4,000mAh battery which is below nowadays standards, but still is adequate.

The device will hit India in three colorways – Black, Blue, and White/Silver. It will reach the market with a price tag close to INR 25,000 ($333).