The Chinese Double 11 sale festival is about two weeks away and many Chinese manufacturers are already activating price cuts. According to Xiaomi Group Vice President, Lu Weibing, the company will provide 1 billion ($149 million) subsidies in all channels on the Double 11 sales. Furthermore, he also revealed that the Redmi K30S Extreme Commemorative Edition will be officially released on October 27. 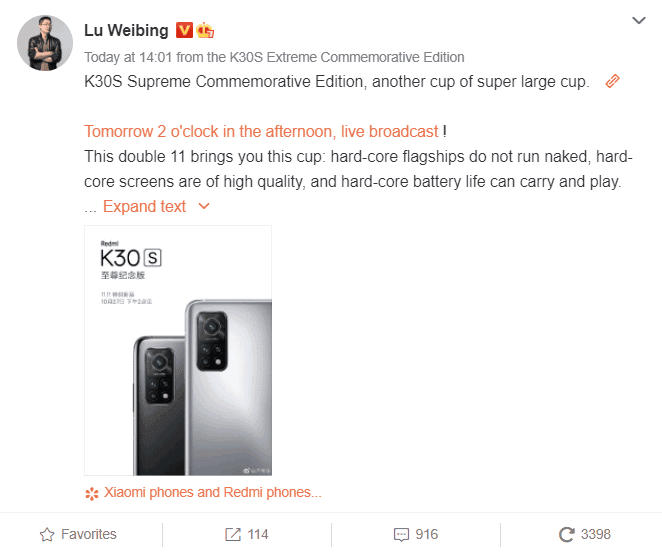 Lu Weibing said that for this year’s Double 11, Xiaomi’s theme is “Intelligent Creation of New Life”. The greatest incentives will be used to promote the overall popularization of smart life to users. Lu Weibing also revealed why the company decided to rebrand the Mi 10T as Redmi K30S Commemorative Edition. According to him, the Xiaomi Mi 10T is a huge success outside China. It makes sense for the company to bring this device into the Chinese market. The Redmi K30S Extreme Commemorative Edition will form a major part of Xiaomi’s Double 11 sales.

Taking into account Redmi’s positioning of the ultimate price-performance ratio, the starting price of the smartphone should be around 2500 yuan ($373).

Next iPhone 12 frames are very sharp and may hurt users