Oppo is gearing up for the launch of it’s Reno 5 Series in China. The smartphone has appeared on the 3C certification website with model number Oppo PEGM00, and PEGT00. According to the 3C certification, Oppo Reno 5 series has a 65W fast charging support similar to its predecessor – Reno 4 Series. A few days back a Weibo leakster Digital Chat Station also posted the information about Oppo Reno 5 series 65W fast charging and its colors. The Leaker in its post said Oppo Reno 5 series will come in four color options that include Starry Dream, Aurora Blue, Moonlight Black, and Star Wish Red colors. 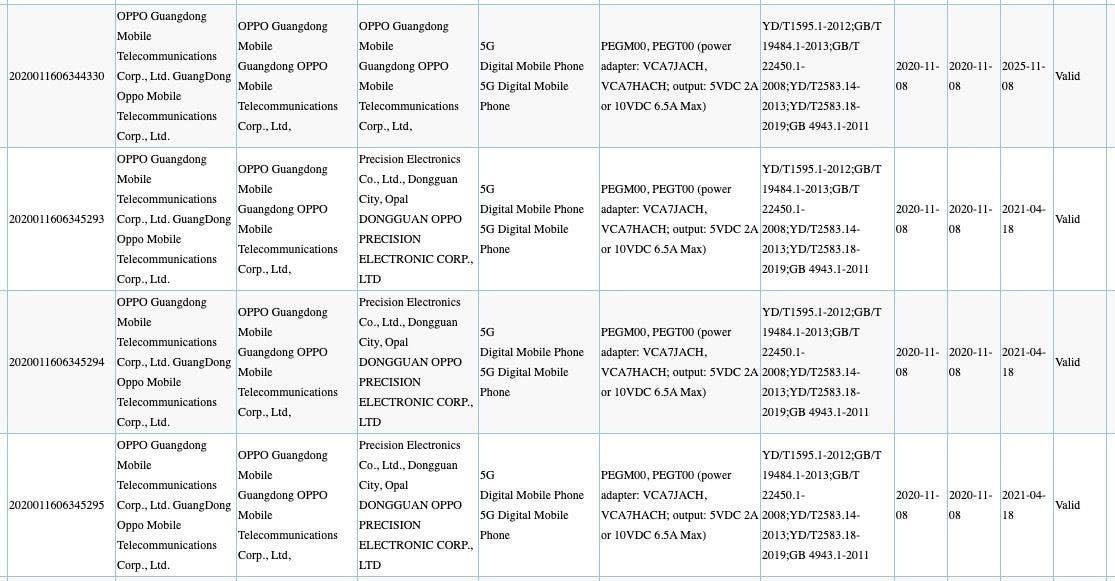 Recently, Oppo Reno 5 smartphone was spotted on TENAA with the same PEGM00 and PEGT00 model numbers. The TENAA listing also revealed the photos of Oppo Reno 5. It showcased the quad-camera setup along with an LED flash at the back. Although the information about the camera sensors was absent. However, on the right side of the phone, there is a power button and on the left side, the volume rockers are placed.

According to the previous leaks and rumors, Oppo Reno 5 will be powered by a Dimensity 800U chip with 5G network support. It will feature a 6.43-inch AMOLED panel with a punch-hole for a selfie camera. The smartphone has a quad-camera setup at the back with a 64MP primary, 8MP, 2MP, and 2MP camera sensors.

The smartphone takes its power from a 4300 mAh battery with 65W fast charging support. Oppo Reno 5 comes running on Android 11 out of the box. The smartphone measures 159.1×73.4×7.9 mm. For more details about Oppo Reno 5 stay connected with us. As we are expecting some more leaks in the coming days.