The biggest social network Facebook confirmed on October 21st, that they are testing a new feature called “Neighborhood” to connect local people. Based on the media information, this feature was so far tested only in Canada, but it will surely come soon worldwide During the quarantine people are searching for new ways how to communicate, so lets check out a couple of social apps designed for connecting with users nearby.

ZINGR is a social app to help with connecting to  people nearby. This social app uses GPS to connect the nearest people and posts they shared. This is a great way to know, whats happening around you. ZINGR allows people to easily discover things they like just by #hashtags. Unlike Facebook or Nextdoor,  the social app ZINGR is more like a hybrid version of Instagram and Twitter. You can upload some good quality photos, videos or just “tweet” some random thoughts and share it with people around you. It is also much easier to find new friends and discover people near you with the same hobbies.

ZINGR is maybe the best app to discover the most trending things around you or to share some positive content with your neighbours. And in the process make some new local friends with same interests or just follow all the news around you.

ZINGR doesn’t need a real name, age or gender upon the join-in registration and the network is totally free. Now it also supports more than 85 languages. Developed in Lithuania in 2019 by Kęstutis Gedaitis, ZINGR can be downloaded from Apple store or Google Play store. 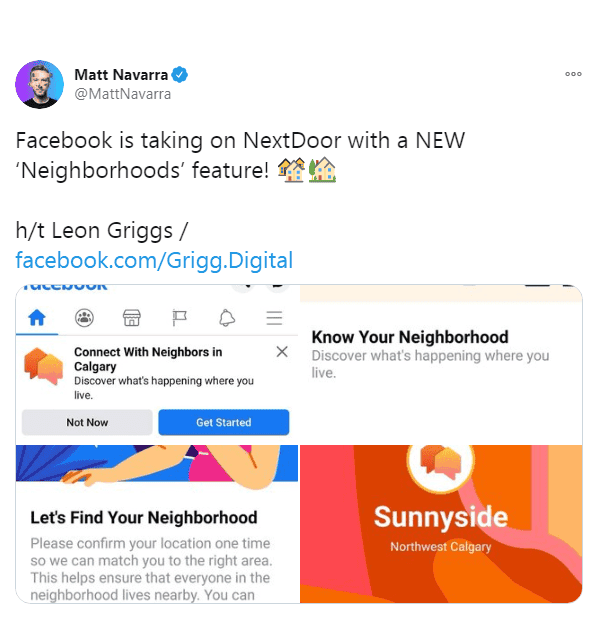 Announced by Facebook on October 21st, but there isn’t much information about it’s exact features. So we can be going by just all the stuff revealed in the Twitter post from Matt Navara.

But it’s clear, that Facebook is building this new future as an alternative to “Nextdoor” app to connect the local communities. It can be helpful not just during the pandemic. There are many local groups on Facebook, so we can imagine that the UI of this new “Neighborhood” feature can be similar to the current framework.

It’s not the first time Facebook tried to introduce their own “clone” version of an existing app. Remember “Reels” as the answer to “TikTok” social videos ? Instagram by Facebook also allows users to create and share short videos, with features similar to “Snapchat” like disappearing images and such.  But well Facebook as the biggest social network just needs to keep the pace with everything. 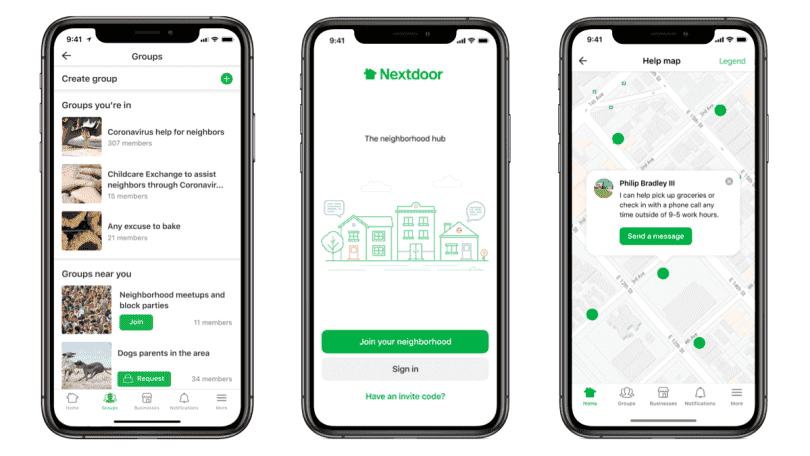 Nextdoor social network is one of the biggest current ones in the market. Launched in 2011 in US and governed by the CEO Sarah Friar. This local network released in 11 countries and is still growing during the COVID-19 pandemic. But the planned release of a direct Facebook competition can spell trouble for this platform, which is currently valued at about 4-5 billion dollars. Potential problems of Nextdoor are not worrying for ZINGR though, as this app uses more entertainment content.

Users of Nextdoor need to provide the real names and addresses upon registration, but on the other hand that means their posts can be seen only by verified Nextdoor members living in the same area. So double edged sword with the privacy issues.

Which local social app to use? Which one is the best for local businesses?

Those are tricky  questions and the answer will depend on your preferences. Facebook Neighborhoods and Nextdoor will be more appealing to the more “private groups” types, who don’t mind providing their real name, gender or age. And while the new Facebook feature will have its own individual privacy setting, the whole concept can be off putting for many. On the other hand ZINGR is more open to local public without any requests or real personal info to  connect to the nearest people and discover their posts by GPS location. This app is one of the safest social apps  which doesn’t share the current location to protect the privacy of its users.

Most local business companies use more than just one social network account to grow up their brands. There are great options to reach local communities,  like Linkedin or Twitter networks. But most of themarketing professionals like to build up the brand with wider variety of them.  TikTok may be also one of the popular options, even though this social networks still doesn’t have any direct tools for advertisers. It just spreads the viral videos and popular hashtags, which can in turn help with the local brand recognition.

Speaking about #hashtags, the social app ZINGR uses completely unique  function to connect not only the nearest people by the GPS location, but also connect them using nearby hashtags.

And with new update it helps local business to reach their clients more directly. The most used nearby #hashtags list allows the company or an influencer to present their business to people nearby. The most used hashtags goes viral in that area and its possible to start spreading the word around the world to reach the most used #worldwide hashtags. So the ZINGR app can help local businesses to grow their business using the most trending hashtags in that area.