Despite its numerous troubles, Huawei is still working on a couple of smartphones. A few weeks ago, two Huawei models got the Chinese 3C certifications. According to the certification, these devices come with model numbers TET-AN00 and TET-AN10. They are both 5G devices and are manufactured by Huawei. Furthermore, these phones use Huawei’s latest 66W fast charging technology. At the time, there were reports that this device is the upcoming Huawei ate X2 foldable phone. Now, two Huawei phones with the same model numbers appeared on TENAA. From all indication, these devices should be the upcoming Huawei Mate X2. However, the TENAA listing did not reveal their specification. 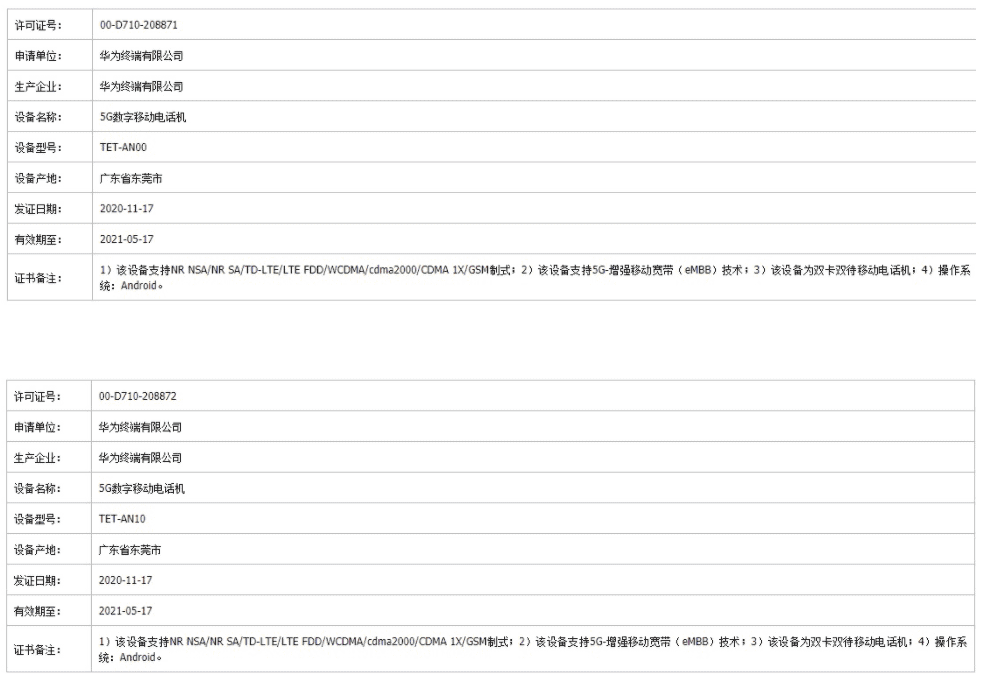 Read Also: Qualcomm officially confirms that it has licenses to supply Huawei some products

These devices will be handled by Huawei Machine Co., Ltd. which is wholly owned by Huawei. This means that the phone is actually a model produced by Huawei in its own factory. Unfortunately, there is no image or parameters accompanying the listing.

According to the information on 3C certification, Bluetooth certification, and other listings, the Huawei Mate X2 should come with the Kirin 9000 processor and support 66W super-fast charging. It uses an 8.3-inch display with a refresh rate of 120Hz and a resolution of 2480 × 2220. The rear rectangular four-camera lens module includes two 40MP lenses that support 3x optical zoom. This device will run on the EMUI 11 system on top of Android 10.

Honor sale has no significant impact on Huawei

After all the speculations regarding the sales of Huawei’s sub-brand, Honor, has now officially confirmed the sales. Huawei Investment Holding Co., Ltd. today issued a statement regarding the sale of Honor’s business assets. Huawei Investment Holdings stated that it decided to sell the assets of Honor business as a whole, and the purchaser is Shenzhen Zhixin New Information Technology Co., Ltd. The aforesaid business asset sales are in line with the decision process of the company’s internal decision-making bodies. However, it claims that the sales will not cause a decrease in the company’s combined net assets. It will also not have a material adverse effect on the company’s solvency.

Huawei said that at a difficult time when industrial technology elements were unsustainable and consumer business was under great pressure, Huawei invested in the continuation of Honor channels and suppliers. It decided to sell the assets of Honor business as a whole, and concentrate on Huawei.