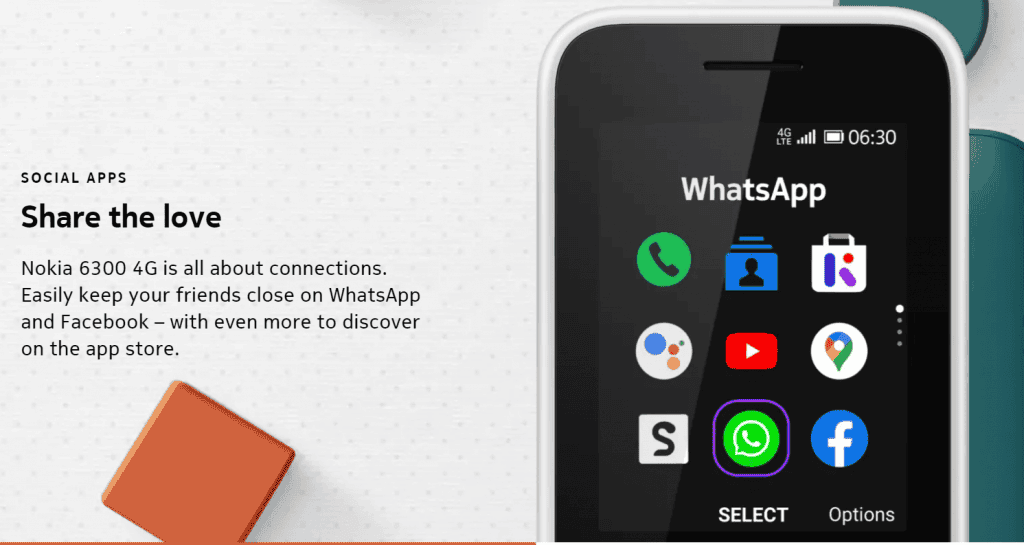 The Nokia 6300 4G comes with a 2.4-inch QVGA display. The camera is a VGA sensor and this device also comes with a Flash that can be used with the camera or as a flashlight. This phone uses a 1500 mAh battery with a standby time of 27.9 days and a talk time of 8.2 hours. Under the hood, the Nokia 6300 4G uses a Qualcomm Snapdragon 210 processor which is comparable in performance to smartphones. The mobile application store has applications such as UC browser, PDF reader, and QR code scanner. The mobile phone supports 4G full Netcom, dual card dual standby.

Nokia 6300 uses a plastic case and is available in four colors: green, blue, gray, and white. It has a standard numeric keypad, 512 MB of RAM, and a 3.5 mm headphone jack. There is support for microSD cards and two SIM cards, Bluetooth, Wi-Fi, Hotspot, and GPS. According to Nokia, this device promises a seamless connection to social apps like WhatsApp and Facebook. This feature phone also supports apps like YouTube and Google Maps. Furthermore, this phone comes with Google Assistant. In addition, you can easily connect to friends and family as this device supports WiFi and Hotspot functions.