Xiaomi has officially announced that its new high-end smartphone called the Xiaomi Mi 11 will be officially released on December 28. We already know almost everything concerning this handset. So the release event will only confirm this or that feature. But one thing we missed.

Xiaomi Mi 11 To Come With A Number Of Latest Technologies

Today, Xiaomi officially revealed that in less than a year, WiFi 6 will be replaced again! It will be launched by Xiaomi Mi 11. The company also informed the users that the enhancement is not little. The bandwidth is twice as high as the previous generation, reaching 160MHz bandwidth, the transmission information density is increased by 20%, and the final network speed is 2.1 times faster, up to 3.5Gbps. What’s more interesting, now, it supports 4K QAM encoding for the first time. 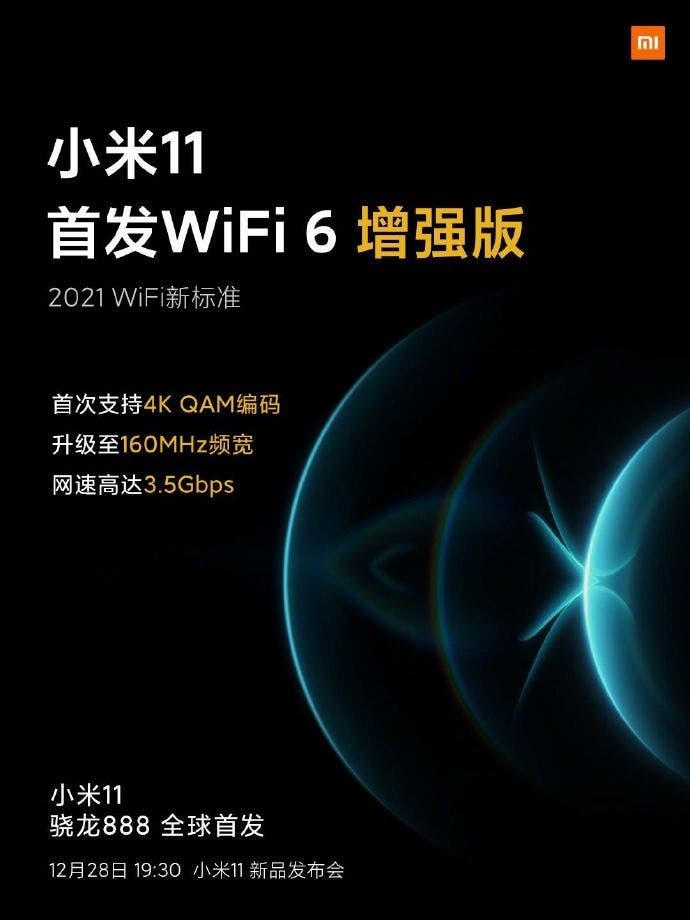 Regarding the performance of the Xiaomi Mi 11, the machine has appeared on GeekBench today. The GeekBench screenshot shows it sports the Qualcomm Snapdragon 888 chip, has 12GB of RAM, runs Android 11, etc. its single-core score is 1135 points, while the multi-core score reaches 3790 points.

As for WiFi 6, it is the latest wireless standard, and its value is to address our growing demand for data connectivity and bandwidth. Speed is only part of the role of Wi-Fi 6. The transmission rate of WiFi 5 is 3.5Gbps, while WiFi 6 has reached 9.6Gbps.

Of course, it is difficult to achieve this speed in actual use. The biggest improvement over WiFi 6 is the bandwidth. The bandwidth of WiFi 6 is 4 times that of WiFi 5. This means that Wi-Fi 6 can connect more devices at the same time without reducing the network speed of these devices.

This is like a truck driving cargo on the road. Even if there are many cars on the road, but the road is wide enough. So there is no need to worry about traffic jams.

Compared with WiFi 5, WiFi 6 WPA3 (Wi-Fi Protected Access Version 3) security protocol has higher security. And there will be no interference between WiFi to ensure signal stability.