Yesterday, Reuters reported that the US government included 9 Chinese companies on the so-called “Chinese military-related” US blacklist. Interestingly, Xiaomi and COMAC were in the list. Moreover, as the source proves according to the relevant investment ban, US investors must sell their shares in “blacklisted” companies before November 11 this year.

The company noted that the U.S. Department of Defense issued a press release on January 14, 2021 (U.S. time), stating that the company will be included in the relevant list in accordance with Article 1237 of the National Defense Authorization Act of 1999.

The company has always adhered to legal and compliant operations and abided by the relevant laws and regulations of the place of operation. Services and products are used for civilian or commercial purposes. The company confirms that it is not a Chinese military owned, controlled or related party, nor it is a Chinese military company as defined under the US NDAA law. We will take appropriate measures to protect the interests of the company and shareholders.

The company is reviewing the potential consequences of the incident in order to fully understand its impact on the Group. The company will release further announcements in due course. 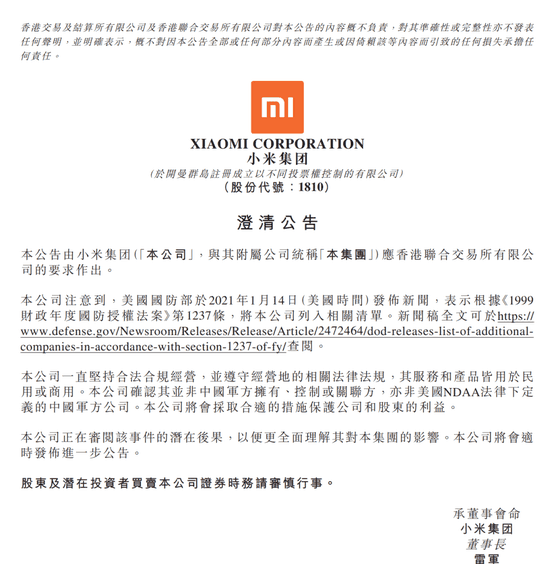 How China Comments On This

Chinese Foreign Ministry spokesperson Zhao Lijian said in response to relevant questions on the 14th that China’s position on relevant issues is consistent and clear. “The Chinese government has always encouraged Chinese enterprises to carry out foreign economic cooperation in accordance with market principles, international rules, and laws and regulations. What we are opposed to is the politicization of economic and trade issues, the abuse of national power, the generalization of the concept of national security, and the unprovoked suppression of foreign companies. The United States should earnestly respect the principles of market economy and fair competition, abide by international economic and trade rules, and provide an open, fair, just, and non-discriminatory business environment for companies from various countries, including Chinese companies, to invest and operate in the United States.” 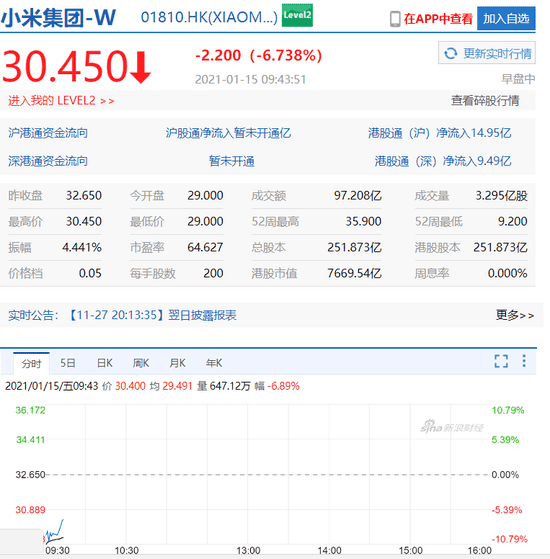 Moreover, a few days earlier, Zhao Lijian said that the direct impact of the US repression on related Chinese companies is quite limited, and what will ultimately damage the US national interests and image, as well as the global status of the US capital market. The US should respect the rule of law, respect the market, and do more to maintain the order of the global financial market, protect the legitimate rights and interests of investors, and contribute to the stable development of the global economy. Not only China, but other countries are also looking at what the United States does. The behavior of the United States will determine whether its image in the eyes of the people of the world is credible, unreliable, and worthy of cooperation.

Is Everything OK With Xiaomi’s Finances?

On November 24, 2020, Xiaomi Group released its three quarterly report for 2020. In the third quarter of 2020, Xiaomi’s total revenue reached RMB 72.2 billion ($11.16 billion), a year-on-year increase of 34.5%; adjusted net profit was 4.1 billion yuan ($0.63 billion), a year-on-year increase of 18.9%. The overall performance far exceeded market expectations. As many as 15 performance indicators such as revenue and net profit hit a record high in a single quarter.

The top six smartphone brands by shipments in 2020 are: Samsung, Apple, Huawei, Xiaomi, OPPO and VIVO. Among them, the shipments of Apple and Xiaomi both achieved annual growth of more than 10%.

According to the Securities Times, Pang Ming, chief economist of Huaxing Securities (Hong Kong), said, “I think the impact is temporary and not long-term. First of all, Xiaomi is a Hong Kong stock company and has entered the Southbound Stock Connect list, supplemented by southbound funds. If the shares of Xiaomi continues to be released, it is believed that it will be bought by more domestic investors. With the situation of the US government still unclear, foreign investors and individual investors will be more cautious. This ban has a wide range of attacks and will involve related securities derivatives, and even passive ETF funds. Some position adjustments will also be made accordingly. Whether some index service providers will make adjustments accordingly requires attention.”

Again About The Stock Price

SPDB International stated in its research report that it continues to be optimistic about the certainty of performance growth brought about by the increase in the share of Xiaomi smartphones in China and Europe.

In 2021 and 2022, global smartphone market will enter a recovery and upward cycle. Sales should increase by 6% and 4% year-on-year;

Xiaomi’s share in China and EMEA (Europe, Middle East, Africa) will increase significantly in 2021 and 2022. Therefore, Xiaomi has a high certainty of growth in the next two years. In addition, Xiaomi’s net profit forecasts for 2021 and 2022 will be improved. Therefore, it will raise the 12-month target price to 42 Hong Kong dollars ($5.42).