Sony may not be the most appealing smartphone maker in the market nowadays. The company has completely reduced its efforts in this segment. Instead of multiple handsets, it brings just a few per year. Its latest flagships come to bring the experience of its Mark cameras to the smartphone segment. Even though the brand may not be among the trending brands in the segment, it deserves some praise for being among the first to ship Android 11 for its smartphones. A couple of months ago, Sony announced its Android 11 roadmap, and so far it has been complying with its promises with bells and whistles. Today, the company is bringing the update for the Xperia 1 and Xperia 5.

Back in the last month, the company managed to deliver an Android 11 update to its Xperia 1 II. The Xperia 1 II was one of the flagships released by the Japanese giant in 2020. Hence, it was one of the first devices to get the update as newer devices to come first in the priority list. Now, the firmware update is making way for the 2019 flagships. The new firmware s rolling out with 55.2.A.0.630 build number for both the Xperia 1 and Xperia 5. So far, it seems to be reaching Russia and South East Asia. The update weighs in at around 912MB for devices. 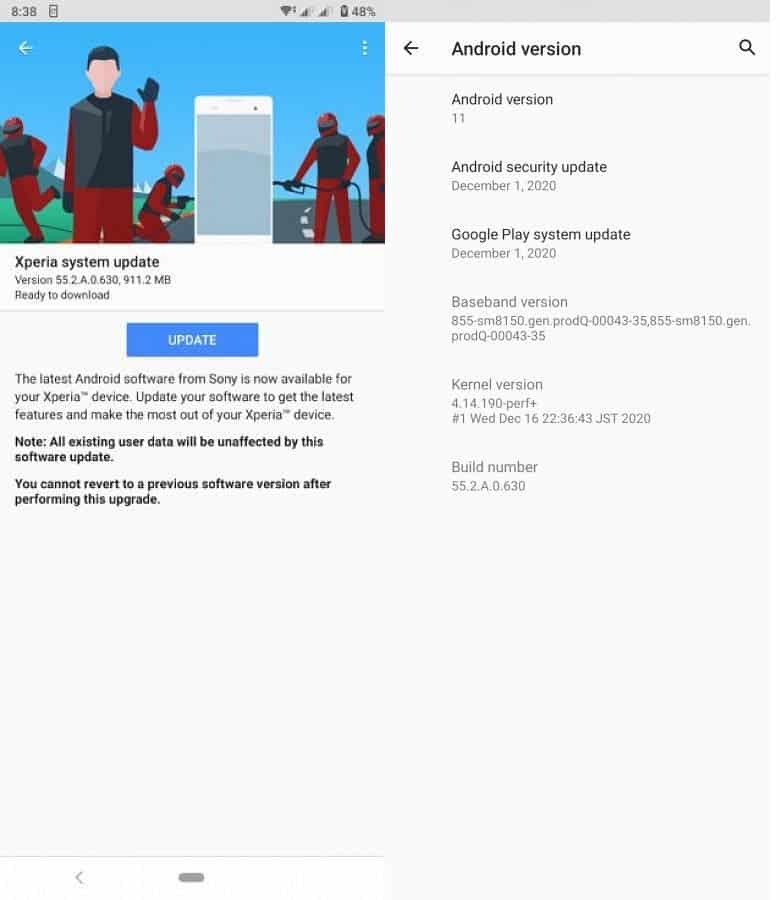 Sony has a very close to stock Android software running on its devices. The big differences are some Sony exclusive applications and the advanced camera app with unique features. When it comes to Android 11, the update brings a set of new goodies. The list includes one-time permissions, bubble notifications, revamped notification shade, new adaptive icons, revamped recents app menu with new shortcuts for print-screen, and more. Worth noting that this update comes with December 1, 2020 security patch which isn’t the most updated available. However, it’s better having it than nothing.

Interestingly, the update for the Xperia 1 and Xperia 5 comes a month earlier than what Sony had originally announced. According to its Android 11 roadmap, these devices would get the update in February. It’s great to see that the company is managing to bring updates ahead of its plans. With the 2019 flagships updated, the company may focus on mid-range devices like the Xperia 10 series. It’s unclear if devices that came before 2019 will get the Android 11 update-treatment.

Once the company finishes its roadmap, we’ll know if more devices will get the same update.

Previous LG will not give up smartphone business despite the rumors