LG Velvet that is launched back in May 2020 starts getting the Android 11 stable update in Korea. The update is rolling out with the firmware version V20c and weighs about 2.3GB in size. LG Velvet Android 11 update also includes LG UX 10 user interface and January 2021 security patch. However, earlier this month it is reported that LG rolls out the beta testing program for LG Velvet in South Korea.

Talking about LG UX 10, it is based on Android 11 and includes all its features. That includes Always-on display, New desktop icons, New enhanced dark mode, New live wallpapers, New Privacy, Notification panel, etc. Along with all the above features, the update improves the overall system performance.

The update is currently rolling out in Korea only, other markets will soon get it. As LG Velvet Android 11 update is a large one, so we recommend you to connect to a stable WiFi connection to download it. Before starts installing the update do charge your smartphone up to 50% at least.  However, if you live in Korea and did not get the update notification, check it manually by going through the settings. 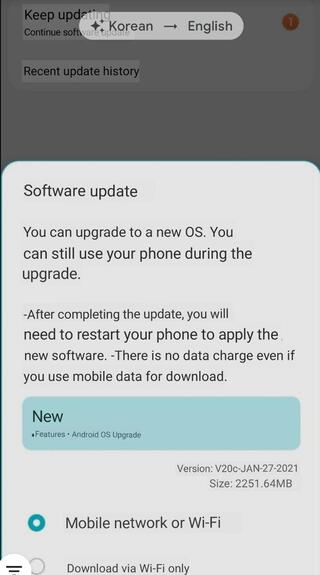 It features a 6.8-inch POLED panel with 1080 x 2460 pixel resolution. LG Velvet is powered by a Qualcomm Snapdragon 765 SoC along with Adreno 620 GPU. The smartphone also supports a 5G network and comes in 6GB/8GB RAM and a 128GB internal storage variant. The smartphone also has a microSD card slot.

Talking about the optics, LG Velvet packs a triple camera setup with a 48MP wide-angle primary camera, an 8MP ultrawide camera, and a 5MP depth camera. The camera setup of the phone also has a LED flash and HDR support. On the front side, there is a 16MP camera for selfies and video chats.

LG Velvet has is water-resistant and has an IP68 certificate and it gets a military-grade MIL-STD-810G rating. The smartphone has an under-display fingerprint scanner.  It packs with 4300 mAh battery with 25W fast charging 9W wireless charging.

Previous Telegram: The import of several chats will be supported soon