Among them, Apple led the global tablet computer market with a market share of 32.5% throughout the year. Apple shipped 53.2 million tablets in 2020, an increase of 6.7% year-on-year. Although the growth rate is significantly slower than other manufacturers in the list, it still ranks No. 1 with a huge market share. 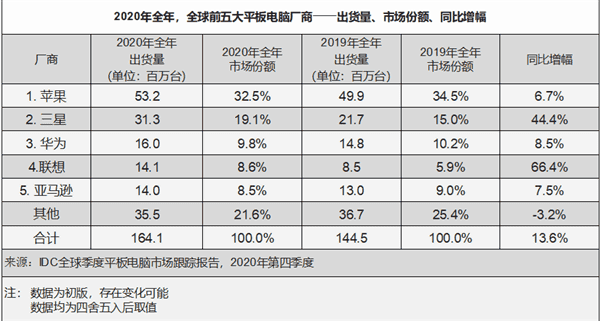 Samsung ranked second with a 19.1% market share, a year-on-year increase of 44.9%, and shipped 31.3 million units throughout the year. As the largest Android tablet manufacturer, Samsung has a number of star products such as Galaxy Tab and Galaxy Tab S6 Lite.

It is worth noting that although Huawei has insufficient shipments due to sanctions, it still relies on its own strong strength to occupy the third position on the list with 16 million shipments and a 9.8% market share, a year-on-year increase 66.4%.

So how will the Chinese tablet market perform in 2020?

According to IDC data, Apple and Huawei basically occupy most of the domestic tablet market. 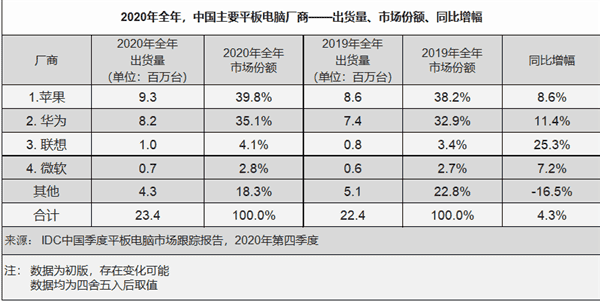 In addition, Lenovo and Huawei ranked third and fourth with market shares of 4.1% and 2.8% respectively.

According to Guo Tianxiang, a senior analyst at IDC China, although the growth rate of the Chinese tablet market in 2020 is lower than that of the global market, it continues the growth momentum of 2019. This proves that the market demand for tablet computers in China has begun to recover in 2019 before the epidemic. The 2020 epidemic only promotes the expansion of these demands. The Chinese market is not recovering simply because of the surge in demand caused by the ‘epidemic’.

It is worth mentioning that Xiaomi CEO Lei Jun said yesterday that the Xiaomi tablet business has been restarted and it will release a new product this year.

Previous 77% Of Indian Smartphone Market Is Occupied By Chinese Brands