In the past two years, smartphone makers have made a great effort to develop reliable fast-charging solutions that can reach the end consumer. So far, Chinese brands such as the ones in BBK Group (Oppo, Realme, OnePlus, Vivo) have been leading the market alongside Xiaomi. Other companies such as Samsung have been lagging behind, but this is about to change soon. A new Samsung 65W charger has just achieved certification with the German TUV SUD authority.

Samsung’s 65W USB Power Deliver charger bears model number EP-TA865 and has already been certified in South Korea. Now, thanks to the new certification we know it supports Programmable Power Supply and can top up devices at up to 20V and 3.25A which effectively means 65 Watts output. 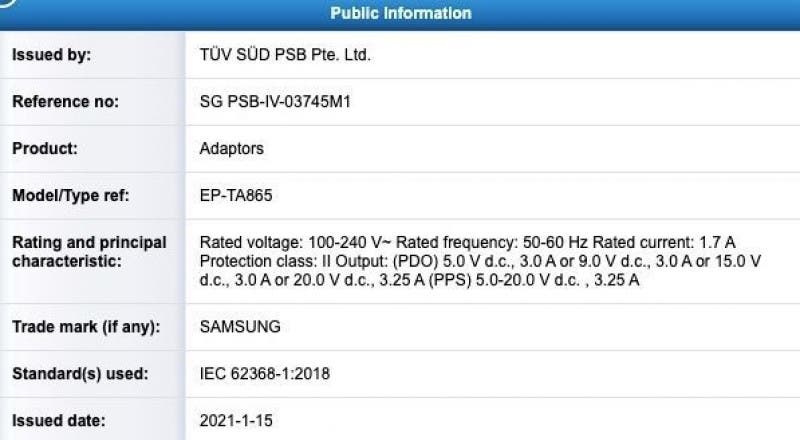 Unfortunately, we don’t know when this charger will reach the end consumer. We don’t even know what device will be able to take advantage of this powerful charger. It can be either a new Galaxy smartphone or laptop. The recently released, Galaxy S21 series support up to 25W fast charging. This is really limited in comparison to Chinese smartphones. For a quick comparison, Xiaomi has a plethora of mid-range phones with 33W fast-charging. Realme on other hand has mid-range phones with 65W fast-charging. The most curious fact is that Samsung already has a 45W charging adapter that is sitting around doing nothing.

Samsung is taking some time to enter the fast-charging race

It’s unclear why the company is taking so much time to bring real fast-charging for its smartphones. Even some of its mid-range phones lag behind the competition with just 15W charging. Most of the mid-range phones in the market nowadays come with at least 18W charging. For that reason, we don’t have big expectations to see a new smartphone sporting Samsung 65W charging anytime soon. Of course, the possible Galaxy Note 21 Ultra would be the most plausible choice. We also have the Galaxy Z Fold3 coming this fall, so it is another possibility.

Although the said devices have the potential to be the first Samsung phones with a 65W charger, this does not mean that the charging brick will be included in the box. After mocking Apple for the charging brick removal within iPhone 12 series, the Korean firm decided to follow with its Galaxy S21 series. Unfortunately, this seems to be a tendency now. We don’t think that Samsung’s 65W charging will be bundled with a future smartphone, it will mostly be available for separate purchase.

Next Galaxy M30s starts receiving Android 11 with One UI 3