Google has begun rolling out a massive update to its Android TV platform. Last week, Google presented an update for users in the USA, Australia, Canada, Germany and France, but only now the update has become available in large quantities, for a large number of users. 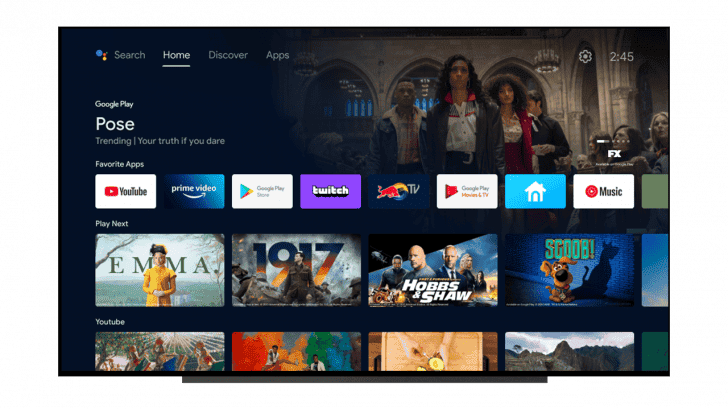 At the top of the home screen, we have three tabs along the side of Search — Home, Discover, and Apps. The Home tab offers a familiar Android TV home screen with quick access to your favorite apps and channels, divided into several sections. Apps gives access to all installed apps, but without app recommendations from the Google Play Store.

The Discover tab displays recommendations based on user actions as well as popular content from Google.

If you already own an 8K Android TV, then you may like this report. Until recently, the streaming peak on the YouTube app for Android TV was 4K. Despite the fact that there is already a couple of 8K TVs as well as 8K contents, users can not stream on YouTube in 8K. However, all that will change as a new update brings 8K support to Android TVs. However, it is important to note that only those on Android 10 and above can get this update.

According to AndroidPolice, the changelog does not mention “HDR support on streams with the .av1 codec”. This means that there is no official confirmation for this feature. However, there is Cast Connect support.

Last month, an update to the YouTube Android app was released, which took many users by surprise with the changed rewind gesture. Now, the deployment of a new version has begun, which has brought in even more useful changes in the interface and behavior of the service. One of them is the “Chapters” function, which has moved over from the web version to the app, which allows you to quickly find the desired section of the video.

The watch timer (on the right side of the screen) can now be switched to a countdown mode to know how much time is left until the end of the video. There are also a couple of convenient gestures for entering and exiting full-screen mode: just swipe up or down, respectively.

The subtitle switch has moved to the player area, which will simplify the process of turning them on and off as needed, and with it, the autoplay button has also moved – a very controversial decision, given that usually the user only needs one time to decide whether he wants to autoplay similar videos at the end the previous one.

Hints for VR play modes have also been added and will be expanded in the near future; along with an option for evening reminders to notify the user to stop watching and go to sleep. The update will be available soon.

Next VLC player download exceeds 3.5 billion times - to get a major UI update