The Steam platform is currently one of the world’s largest comprehensive digital distribution platforms. Players can buy, download, discuss, upload and share games and software on this platform. Today, the number of US games on the platform has exceeded 50,000.

We should note that the platform launches new games almost every day, and often removes games due to copyright, complaints, and license expiration. The number “50,000” only covers the games currently available on the Steam platform.

In November last year, it was calculated that if you want to buy all the games on the Steam platform, it would cost about US$500,000. Now the total cost should be even higher.

The name of Steam fully reflects its idea because the download speed of the game on the Steam platform is very fast. The speed is so fast that it gushes out like steam.

As the article reports, there are 50,046 games listed on the US Steam store. As said, this is not the number of games ever appeared on the platform. Such a number will be way higher. We are talking about games that are currently available for purchase.

Though the platform had been live long ago, the number of Steam games released every year started to increase exponentially in 2014. The platform is getting 8,000 to 10,000 new PC games every year. 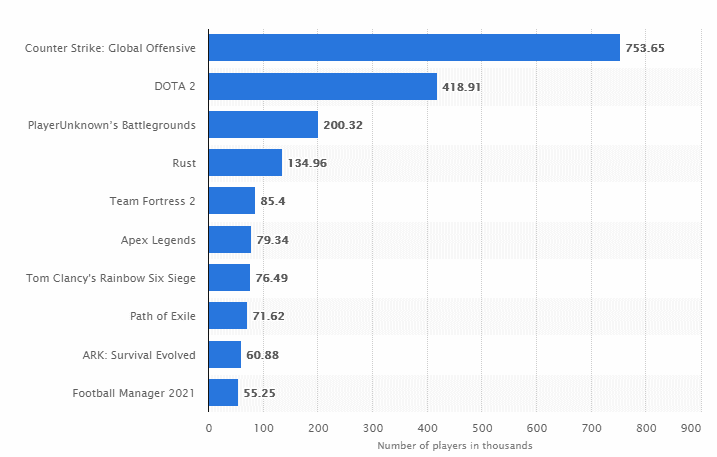 Interestingly, as Statista reports, “the online gaming platform, Steam, was first released by the Valve Corporation in 2003. What started off as a small platform for Valve to provide updates to its games has turned into the largest computer gaming platform in the world. Counter-Strike: Global Offensive was the most popular game on the platform in January 2021, racking up an impressive 753.65 thousand concurrent players.”

Previous PayPal Brings Its Cryptocurrency Service To Britain: Who's Next?

Next 5 Flagship Phones That Are On The Road: Which One You Choose?