The demand for the Xiaomi Mi 11 has been very high because it is the only model in the series for now. However, in recent times, there have been several reports regarding higher versions in this series. We have had reports on the Xiaomi Mi 11 Pro as well as the Xiaomi Mi 11 Ultra. According to popular Twitter leakster, @Max Weinbach, a new Xiaomi Mi 11 series top model number is M2102K1G, and its code name is “star”. 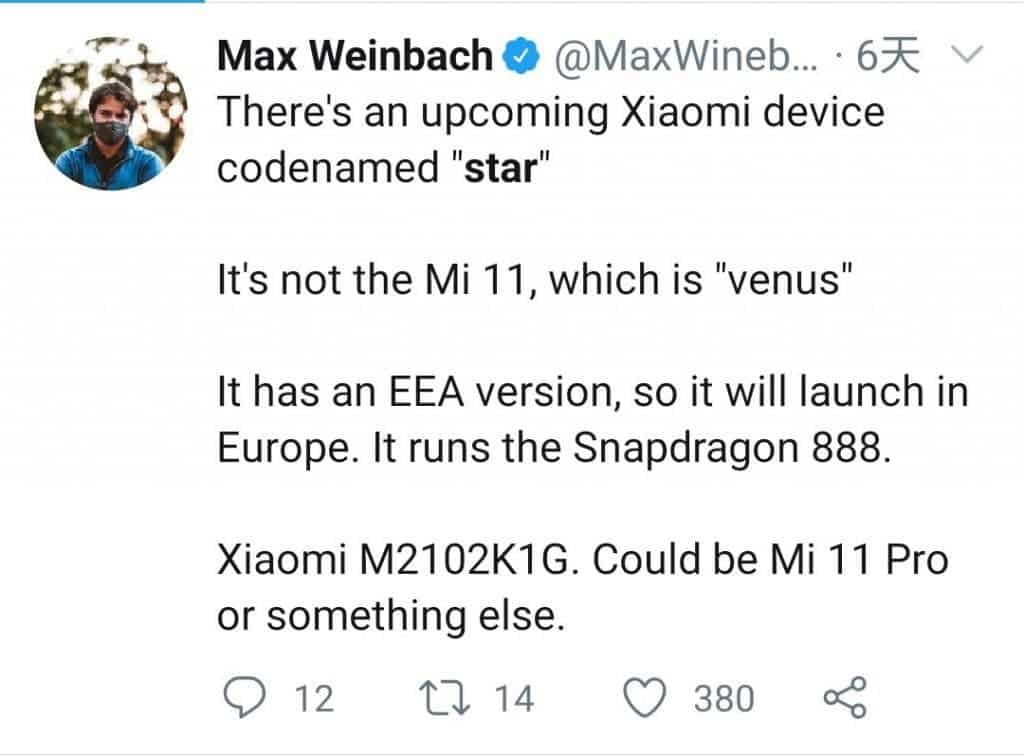 This is different from the Xiaomi Mi 11 whose codename is “venus”. According to Max, this model has an EAA version which means that it will launch in Europe. Furthermore, this device will also run on the Snapdragon 888 flagship SoC. However, the leak was not speciffic about the name of this device, he only speculated that it could be Xiaomi Mi 11 Pro.

Fro the speculations so far, we expect the Xiaomi Mi 11 Pro model to launch in March. There are also information that this series will have a Lite model with Snapdragon 870 SoC.

From previous speculations, the Mi 11 Pro will come with a 6.81-inch 2K quad curved display. This display will have a resolution of 3200 x 1440 and a pixel density of up to 515PPI. It will also support a 120Hz refresh rate, 480Hz touch sampling rate, and DCI- P3 color gamut display. In addition to the Snapdragon 888 processor, this phone will use LPDDR5 and UFS3.1 storage technology. We expect that there will be a 16GB RAM version.

According to popular Weibo leakster, @DigitalChatStation, the battery size of the Xiaomi Mi 11 Pro will be larger than the Mi 11. His report claims that the Mi 11 Pro will come with a 5000 mAh± dual-cell battery. This is huge and acceptable for any flagship smartphone. In terms of charging capacity, it will support 120W wired fast charging and above 55W wireless fast charging. The battery capacity should be above 4000 mAh. There are reports that the Mi 11 Pro and Mi 11 Pro Extreme Edition will launch as early as next month.

Since the launch of the Xiaomi Mi 11, the popularity of this device is very high and it has been largely out of stock. According to Xiaomi, it sold over 1 million units of this device in just 21 days. Despite these huge sales, the demand is still high.

Previous Microsoft Surface Duo to get Android 11 update this year

Next The E.U. to cooperate with Samsung or TSMC to promote local semiconductor production