The IoT or AIoT segment is finally catching up with customers in India. One of the devices that carry this segment forward, the Smart Speakers, is booming in the Asian country. Despite the decline in bigger nations such as China, a report from techARC reveals that the shipments exceeded 1 million units for the first time in India. Amazon has the crown of the smart speaker segment.

According to the report, the last quarter of 2020 contributed to 40% of the Smart Speaker shipments. Overall, it is occupied by giants such as Amazon, Xiaomi, Google, and Apple. Among these, Amazon leads the market with a whopping 79% market share. Once again, the e-commerce giant, shows how its IoT products are relevant for the market. The brand has a set of Echo products powered by Alexa in distinct price segments and with a bunch of features for the most varied users. Among the Top 5 best selling smart speakers in India we have:

The Echo Dot (4th Gen) was unveiled last year in September by Amazon. It is currently retailing for  ₹3,999 in India. Amazon is managing to establish a solid presence in the under INR 5000 segment despite competition from Chinese brands. Another US giant also had an important place in the popularization of Smart Speakers in India. Google is the third on the list with the Google Home Mini being its best-selling device in the Asian country. Another interesting entry in the list is Xiaomi. 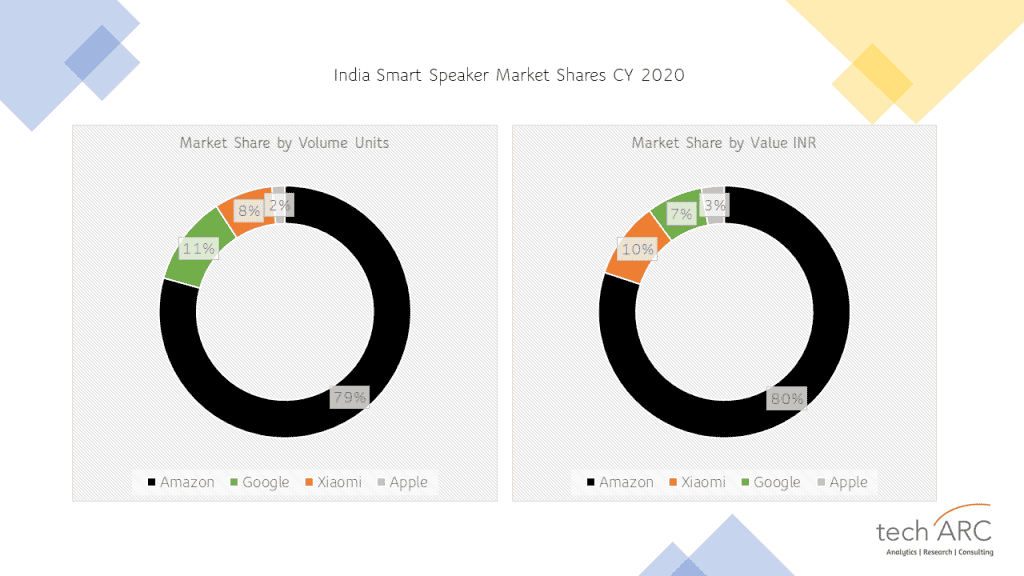 Despite the growing anti-China sentiment in India, the Chinese brand occupied second place in the overall market share by Value. The brand entered this segment in India last year with the Mi Smart Speaker that costs INR 3,499. The rapid growth shows how Xiaomi’s name is a solid name in India. In case you don’t know, the brand is the top-smartphone market in the country.

The report further states that Xiaomi managed to ship 75,000 units in the first year, capturing 8% of the market share. Google, on the other hand, has an 11% share in unit shipments but drops down to 7% in value. Apple also its a slice of the Indian market with the HomePod Mini. It dominated 84% of Apple’s 2% overall shipments in 2020.

The report states that the smart speaker segment will grow further with a 35% YoY growth in the next 2 to 3 years. The category below INR 5,000 will reach the next level with the arrival of other brands.

Previous Nothing acquired Essential, but the deal is all about patents