March has started, and Realme has bold plans for this month. In the next few hours, the company will be unleashing its first “performance flagship” dubbed Realme GT 5G. Furthermore, the company will also update its numbered mid-range series until the end of the month with a vanilla Realme 8 and Realme 8 Pro. Yesterday, March 2, the company unveiled its 108MP camera technology and confirmed that the Realme 8 Pro will be the first phone to sport it. It also confirms the existence of the Realme 8. Now, Madhav Sheth, CEO at Realme, confirmed the device’s existence along with some key specs.

The executive shared a photo of the phone and its retail box. Apparently, the company isn’t very concerned in showing the device ahead of the launch. Well, in the end, he isn’t only advanced possible leaks. That said, Mr.Sheth’s revelation also brings major specifications and some of the phone features.

The Realme 8 will pack a 6.4-inch Super AMOLED screen, which will be a first for the mid-range series. Up to the moment, Realme-numbered phones only had LCD. Under the hood, a major disappointment – the phone will bring back the Helio G95. The chipset is good, but it is the same found in the Realme 7. So we will not see an upgrade in terms of performance. Also, this chip is based on an old 12nm standard which is already outdated at this point. Other specifications include a 5,000mAh battery with 30W Dart Charge. This also confirms a USB-C port.

In counterpart to the Realme 8 Pro that will sport a 108MP snapper, the Realme 8 will have a 64MP unit. The design of the camera is different than its predecessor. Now we have four shooters in a square formation, accompanied by a dual-LED flash underneath. Interestingly, Realme is also bringing its huge “DARE TO LEAP” slogan. Like it or not, the bold letters are here to stay on certain Realme handsets. 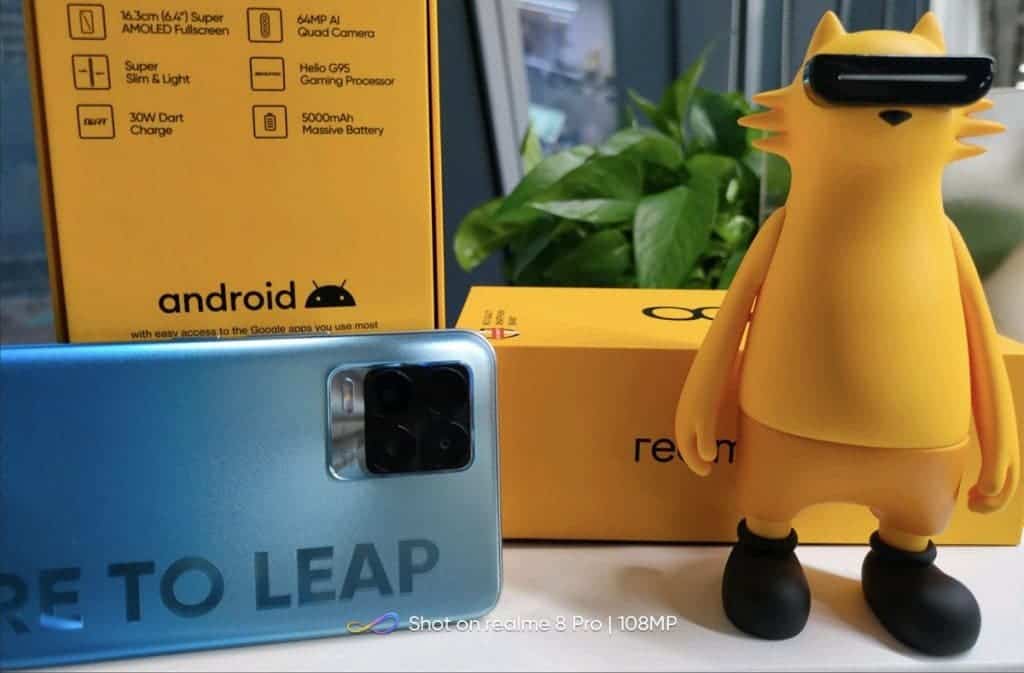 Another interesting reveal in this picture comes through the watermark. The image itself isn’t jaw-dropping but was captured by the Realme 8 Pro and its 108MP camera. Interestingly, the camera fails to focus on the specs of the retail box and the face/sunglasses of the cat. So, we’re not so impressed with this camera 108MP technology. When we take mind that this is a controlled environment, then the lack of focus is a little bit concerning.