As you know nowadays life become very busy, so we try to do work on the go. To get the work done when we are out of the office and commuting to someplace, we should have a good smartphone. So here in this article, after research and testing, we have made a list of the top 10 smartphones for productivity.

Keep one thing in mind below listed smartphones are not just the best smartphones in the market. The list of best productivity smartphones includes the phones that are capable of flawless multitasking, battery for a full day of use, should have all the connectivity options, and fits in your pocket also. We have listed the top 10 phones for productivity below have a look.

It is the latest flagship smartphone from Samsung that was launched in January 2021. Galaxy S21 Ultra is powered by a 5nm chipset, Qualcomm Snapdragon 888 SoC for the USA, China and Exynos 2100 SoC for international variant. Both the processors are the latest and fastest ones from their respective companies. The smartphone has a stunning quad-camera setup with 108MP primary camera. There is a 40MP wide-angle camera on the front side for your video chats. 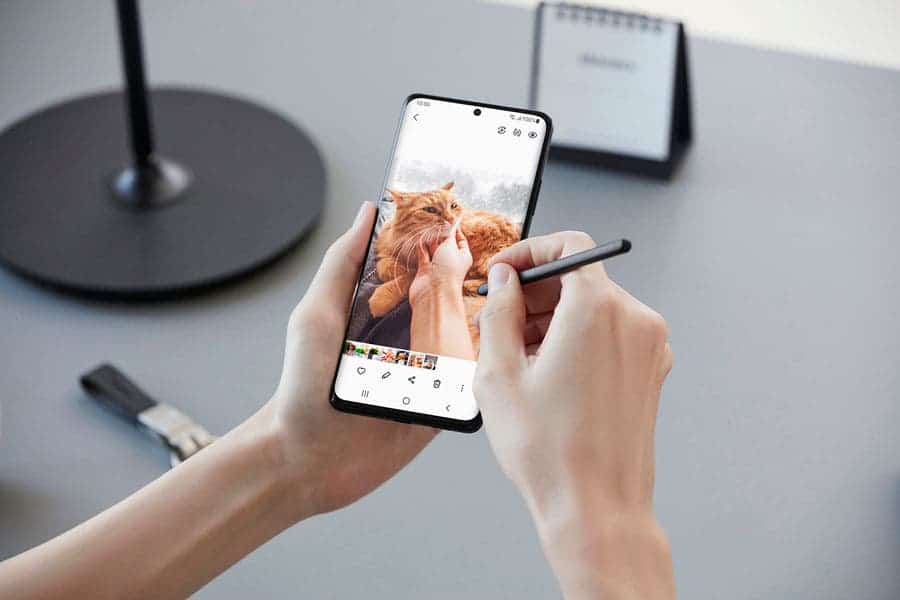 Samsung Galaxy S21 Ultra also supports Wacom-compatible styluses and all S-Pens. And having S-Pen support always helps you to do any kind of task on your smartphone easily, when you’re out of the office. The S-Pen is sold separately with a price tag of $39.99. Moreover, it is said that S-Pen Pro will be launched later this year with more features. It also has a Samsung Wireless DeX support for a desktop experience.  Talking about the battery, Galaxy S21 Ultra has a 5000 mAh battery with 25W fast charging support. It is available in almost all major countries around the globe.

iPhone 12 Pro Max is the flagship device of 2020 from Apple. It has the biggest display among iPhone 12 series smartphones, which will be productive in work. The smartphone is powered by the latest Apple A14 Bionic SoC, which is the most powerful processor till now from Apple. Although iPhone 12 Pro Max doesn’t have any stylus support. Still, the smartphone is placed on the second spot in our list of top 10 smartphones for productivity because of its flawless user interface.

In camera section, the smartphone has a 12MP wide-angle primary camera, 12MP telephoto camera, and 12MP ultrawide camera, and TOF 3D LiDAR scanner. In DXOmark camera ratings, iPhone 12 Pro Max sits at the top with 120 points that is way ahead of the Samsung Galaxy Note 20 Ultra and Galaxy S21 Ultra. The smartphone also has enough battery backup for a full day. It is available in almost all major countries around the globe.

It is the latest Note series smartphone from Samsung with all the high-end specifications. Galaxy Note 20 Ultra features a huge 6.9-inches display with a 120Hz refresh rate and an Always-on display feature. The smartphone is powered by Qualcomm Snapdragon 865+ SoC in the US, China and it is powered by an Exynos 990 SoC in all the other countries. As you might know Galaxy Note series includes S-Pen support, which increases the productivity of a smartphone to the next level.

It packs a triple camera at the back with 108MP primary camera, 12MP telephoto camera, and 12MP ultrawide camera along with laser autofocus. Galaxy Note 20 Ultra also has a great front camera for selfies and video chats. It also has a Samsung Wireless DeX support for a desktop experience. It is available in almost all major countries around the globe.

As its name tells, Galaxy Fold 2 is a foldable smartphone from Samsung. It is packed with very powerful specifications. The smartphone has two displays one is foldable (primary display) and another one is a cover display on the outer side of the smartphone. The outer display is 6.23-inches in size and has a Corning Gorilla Glass Victus protection. Talking about the inner foldable display it is 7.6-inches in size and has a 1768 x 2208 pixel resolution along with a 120Hz refresh rate. Both the display make Galaxy Fold 2 look unique and productive.

The smartphone is powered by Qualcomm Snapdragon 865+ SoC and Adreno 650 GPU. Galaxy Fold 2 also has a powerful triple camera setup with three 12MP camera sensors on the backside along with an LED flash. On the front side, there is a 10MP wide-angle camera for selfies and video chats. However, there is one more camera on the outer display, it also a 10MP wide-angle camera. Samsung Galaxy Fold 2 has a 4500 mAh battery with 25W fast charging support. It is also available in almost all the major companies.

It is Microsoft’s first foldable smartphone powered by Android. The smartphone has two 5.6 inch displays, which can be used in different ways to do almost all the tasks that you do in the office. Microsoft Surface Duo is also compatible with the Surface Pen which is very useful in note-making and drawing. It is powered by an octa-core Qualcomm Snapdragon 855 processor that is made on a 7nm process. 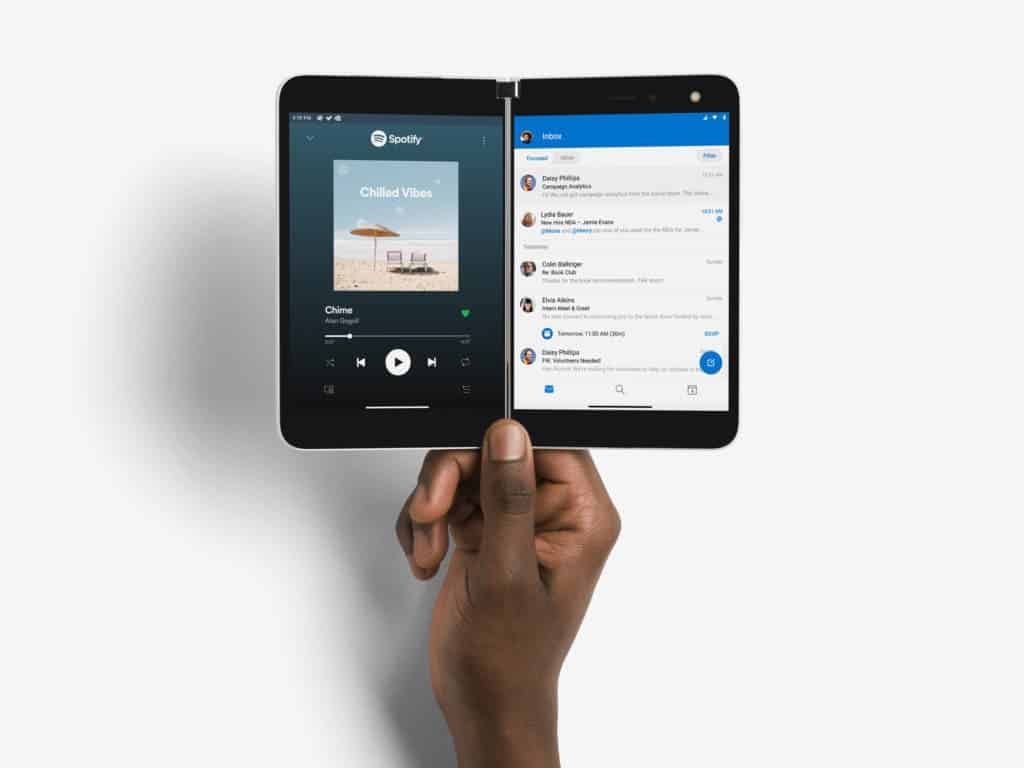 The smartphone only has a single camera that is an 11MP wide-angle camera. It has all the connectivity features Wi-Fi 802.11 a/b/g/n/ac, Bluetooth 5.0, GPS, etc. Microsoft Surface Duo has a 3577 mAh battery that is smaller than the other foldable phones. However, the company claims it sufficient for all-day use.

If you want to have a powerful productive phone without paying a heavy amount, then the OnePlus 8T is one of the best. The smartphone is powered by Snapdragon 865 SoC and Adreno 650 GPU. It features a 6.55 Fluid AMOLED panel with a 120Hz refresh rate and Corning Gorilla Glass 5 protection on it. The display also has an Always-on feature. OnePlus 8T packs a good quad-camera setup at the back with a 48 MP primary camera and on the front side, there is a 16MP wide-angle camera.

Although the camera of the OnePlus 8T is not up to the flagship standards nowadays. But they can take decent photos for you. It is powered by a 4500 mAh battery with 65W fast charging, the company claims that the OnePlus 8T gets a 100% charged battery in just 39 mins.

iPhone 12 is the flagship device of 2020 from Apple. The smartphone is powered by the latest Apple A14 Bionic SoC, which is the most powerful processor till now. Apple makes its user interface flawless and easy to use, which helps in doing tasks much faster.

It is made by Google, We have listed Pixel 5 down here because it is powered by Qualcomm Snapdragon 765G SoC. Still, will Google’s optimization in the user interface of the smartphone makes it very productive. The smartphone has a 6 inch OLED display panel with a 90Hz refresh rate. The display also has a Corning Gorilla Glass 6 protection.

Google Pixel 5 runs on stock Android 11 out of the box. The smartphone gets the latest Android updates as soon as they are released. Pixel 5 has a 4080 mAh battery with 18W fast charging and 12W wireless charging support.

It was launched back in January 2021. Xiaomi Mi 11 has high-end specifications at the mid-range price segment. If you want a phone that can support your heavy apps without any issue and heavy payment. Then Xiaomi Mi 11 is a good one for you. It is powered by the latest Qualcomm Snapdragon 888 SoC that is made on a 5nm process. Xiaomi Mi 11 has a Adreno 660 GPU.

Talking about the camera, the device packs a triple camera with a 108MP wide-angle primary camera, 13MP ultra-wide camera, and a 5MP macro camera. The camera setup also has a Dual-LED flash, and HDR support also. There is a 20MP front camera also for selfies and video chats. Xiaomi Mi 11 has a 4600 mAh battery with 55W fast charging and 50W fast wireless charging support.

It packs a quad-camera setup at the back with a 48MP primary camera. On the front side, there is a 16MP wide-angle camera for selfies and video chats. The smartphone takes its power from a 4000 mAh battery with 10W charging support.

That’s it, the above-listed smartphones are the Top 10 smartphones for Productivity right now in the market. We hope you like this list. We have also made a list of the best photo editing apps and best-rugged smartphones, have a look.

Previous Huawei has been reduced to Pig Farming by the U.S. ban - Is this true?