Motorola started its 2021 mid-range smartphone series with the Moto G10 and Moto G30 last month. A couple of days ago, the brand announced that the Moto G30 and a new Moto G10 Power will be coming to India on Tuesday, March 9. We know most of the Moto G30 specifications since the device isn’t new. However, the Moto G10 Power is a mystery right now. We thought that it could end up as a rebranded Moto G10, but Motorola begs to differ. A new teaser from the company has now revealed that the G10 and G10 Power are two different smartphones.

Today, a tweet posted by the Motorola India account revealed some of the key specifications of the Moto G10 Power. As you may be expecting, the battery is what truly gives it a “Power” name. The vanilla G10 has a 5,000mAh, which already is a huge battery, but the Moto G10 Power goes a level beyond with a massive 6,000mAh battery.

Wish you could explore more and binge-watch non-stop for longer hours? Well, your wish is our command with the brand-new #PowerfulAllRounder, #motog10power that comes with a powerful 6000 mAh Battery & more. Launching on 9th Mar, 12 PM on @Flipkart. https://t.co/1Wx1CWkDGa pic.twitter.com/lw07bkOa46

The handset will also pack a 48MP Quad-Camera system that includes an ultra-wide-angle camera, a macro camera, and a depth sensor. The camera application will come with Night Vision. For those unaware, this is Motorola’s version of Night Mode for shooting in low-light. The Moto G10 Power will also have ThinkShield for Advanced Security and will run a near vanilla version of Android 11. 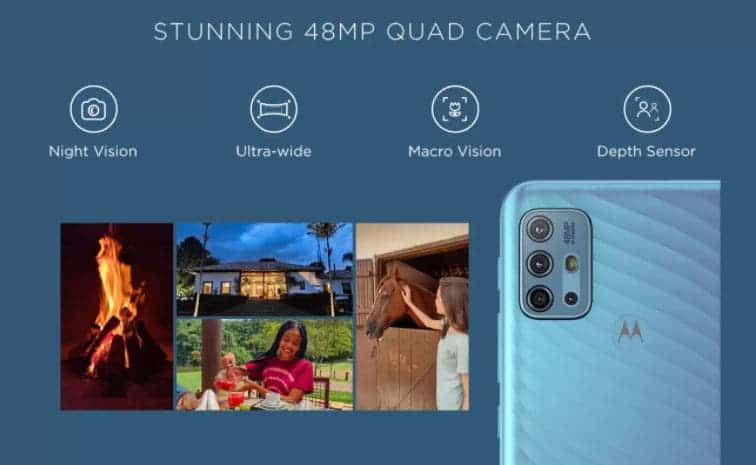 The company is also building the hype for the Moto G30 in India.

The Moto G30 was introduced last month featuring a Qualcomm Snapdragon 662 chipset. For those unaware, this chipset came to the market to succeed the Snapdragon 665. Despite having a lower number, OEMs state that it offers better performance than the SD665. The handset comes in two memory configurations. One has 4GB of RAM and 128GB of Internal Storage and there is another one with 6GB of RAM and 128GB of Internal Storage. The phone also offers support for microSD cards. For now, it’s unclear what configuration will come to India.

The handset has a 6.5-inch LCD with HD+ resolution and a 90Hz refresh rate. This is a waterdrop notch display, the cutout serves as a home for the 13MP selfie snapper. Moving around to the back, we have a Quad-Camera array consisting of a 64MP primary, 8MP ultrawide, 2MP macro, and 2MP depth units. The rear also serves as a home for the fingerprint render which has the usual Motorola logo engraved inside.