Handel Jones, CEO of IBS, an American electronics industry strategy consulting company, said at the SEMICON CHINA forum that Xiaomi, OPPO and VIVO are planning to ship 566 million smartphones in 2021. Interestingly, this figure was 362 million in 2020. This clearly shows the strong competitiveness of Chinese smartphone manufacturers in the global smartphone ecosystem.

At the same time, Handel Jones said that wireless communications represented by 5G smartphones account for about 40% of semiconductor consumption. Prior to this, IDC predicted that sales of 5G-enabled smartphones should rise this year, approaching 550 million units. As a comparison, in 2020, 5G-enabled models accounted for about 10% of total smartphone production.

To Ship So Many Smartphones, These Three Must Work Hard

In addition, according to the global smartphone sales in the fourth quarter of 2020 announced by IDC, Xiaomi’s shipments were 43.3 million, an increase of 32% year-on-year. Also, its market share was 11.2%, ranking third. At the same time, Xiaomi is also the number one Chinese smartphone manufacturer in the global market in the fourth quarter of 2020. 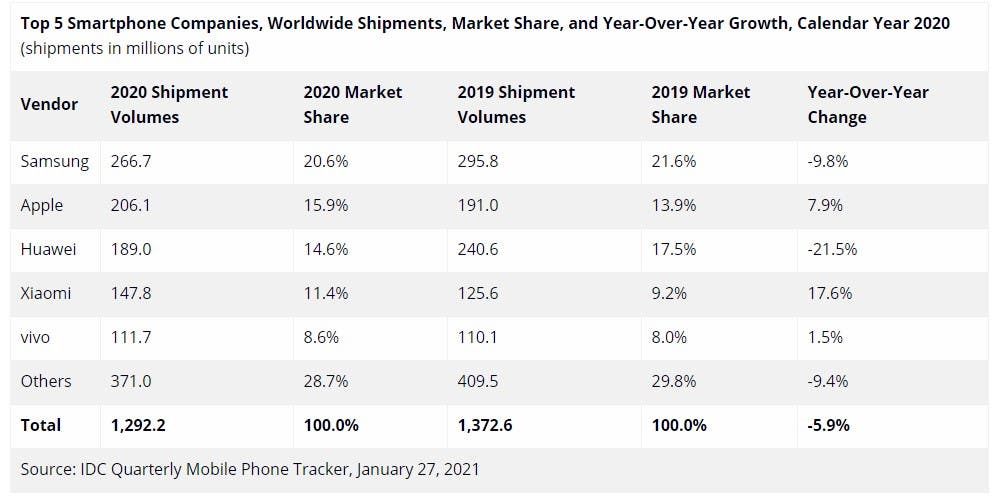 VIVO didn’t enter the top five in the fourth quarter of 2020. But when looking at the overall sales data, we can see that VIVO shipped 111.7 million units. Xiaomi was the fourth with 147.8 million sold smartphones. So OPPO, which wasn’t among the top five manufacturers, sold 102 million units.

Ryan Reith, Vice President of IDC’s Global Mobile Device Project, said: ‘The recovery of the smartphone market and its supply chain is indeed impressive. And the growth at the end of the year proves this. There is still a solid foundation for market demand. As the world moves towards a post-epidemic era, IDC believes that demand will increase and market recovery will accelerate.’

Previous Here are the expectations of Wi-Fi 6 in 2021

Next First look at the iPhone Flip concept smartphone design