You might also know that iQOO is gearing up for the launch of its mid-range smartphone i.e. iQOO Z3. As the company is already confirmed in an image teaser that iQOO Z3 will be launched on 25th March 2021 in China. The iQOO Z3 with model number V2073A spotted on GeekBench. The smartphone gets 688 points in single-core testing and 1988 points in multi-core testing.

Moreover, GeekBench listings also confirm that the smartphone pairs 8GB of RAM and runs on Android 11. After deep inspection, it is confirmed that the smartphone is powered by a Qualcomm Snapdragon 765G SoC and Adreno 620 GPU. The smartphone also has 5G support. Recently, iQOO Z3 with model number V2073A  also spotted on Google Play Console. 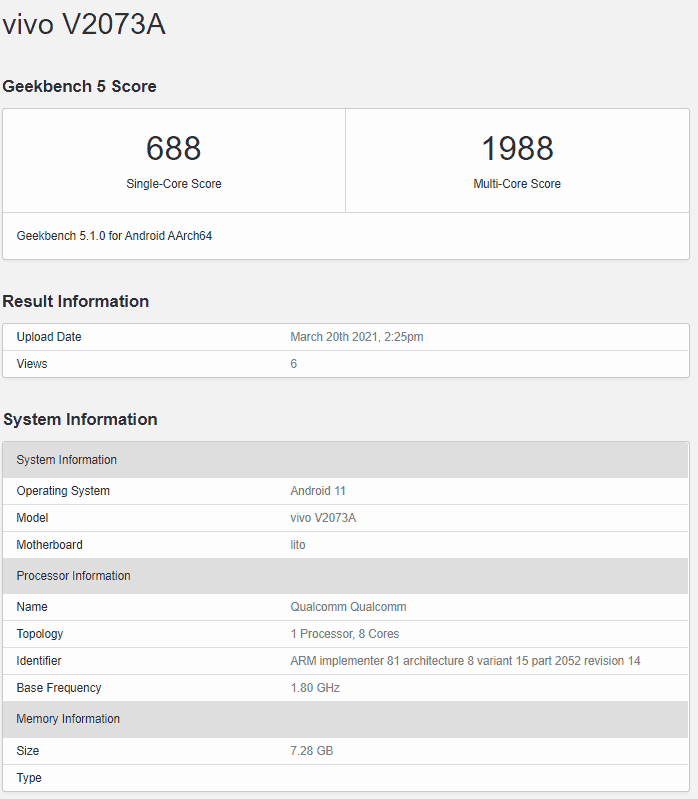 Google Play Console also says that the new iQOO smartphone is powered by a Snapdragon 765G. The iQOO Z3 will feature a display with 1080 x 2408 pixel resolution and 480ppi. It is also Spotted on 3C certification China with 55W fast charging support. The device is also listed on JD.com in China. iQOO Z3 is also has a 48MP Sony image sensor as the primary camera. On the front side, there is a punch-hole camera on display.

The rest of the specs and features of iQOO Z3 are still unknown. We expect some more details about the device ahead of its official launch, so stay tuned with us. It’s important to tell you here that, the iQOO is expected to launch one more 5G supported smartphone in the coming days i.e. iQOO U3x 5G.

Recently, the iQOO U3x 5G is listed for pre-orders through Vivo’s official website, JD, and Suning. The iQOO U3x 5G is expected to feature a 6.58-inch LCD FHD+ display with a 90Hz refresh rate. The smartphone is expected to be powered by Snapdragon 480 Mobile Platform. It will have a 5,000mAh battery with 18W fast charging support.

According to some reports, iQOO U3x 5G will be available to pre-order from 22 March 2021. Although the exact launch date is still unknown.