Today, sales of new gaming smartphones Black Shark 4 and Black Shark 4 Pro started in China, and the company has already summed up the first result. As it turned out, smartphones worth more than $30 million were bought in just 5 minutes. For comparison, the statistics of pre-orders of OnePlus 9 flagships appeared today: $15 million in 50 minutes. The difference in demand is visible to the naked eye: Black Shark is much more popular in the home market.

And this is not surprising, because the most affordable Black Shark 4 on the Qualcomm Snapdragon 870 SoC costs only $ 385 in China. The price of the base version of the Black Shark 4 Pro is $ 615. And this is one of the most affordable models on Snapdragon 888. Besides the price, there are other advantages. For example, 144Hz screen, super-fast internal storage with SSD and 120W fast wired charging. 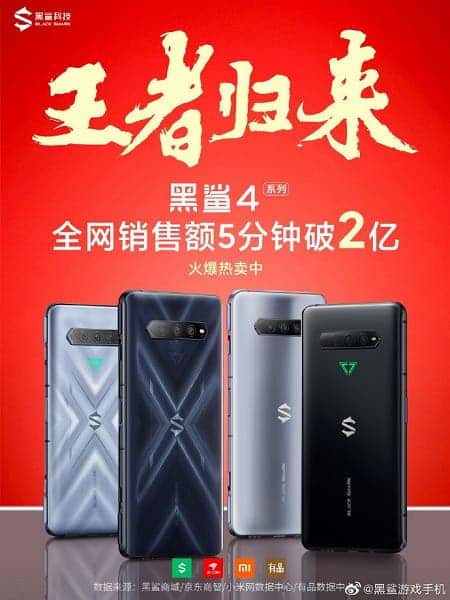 At the time of the announcement of the flagship Black Shark 4 and Black Shark 4 Pro smartphones, the launch date for their sales was not announced, however, as it turned out, from today they can be purchased in China.

Prices and configurations are as follows:

The smartphones are equipped with Samsung AMOLED E4 screens with a diagonal of 6.67 with a frame rate of 144 Hz, triple cameras with sensors with a resolution of 64 (in Black Shark 4 – 48), 8 and 5 megapixels, as well as 4500 mAh batteries with support for fast charging with a capacity of 120W.