Realme is currently gearing up for its upcoming launch event where the brand will showcase its much-awaited GT Neo smartphone. The smartphone is another variant of the previously-launched Realme GT 5G that runs on a Snapdragon 888 chipset. For those who’re unaware, the launch event will take place on March 31 at 2:30 PM (6:30 AM UTC) in Beijing, China. Well, Realme GT Neo has now appeared on GeekBench listing, ahead of the official launch. Furthermore, it looks like the company will unveil another smartphone alongside.

Realme GT Neo surfaces on GeekBench listing ahead of the launch! 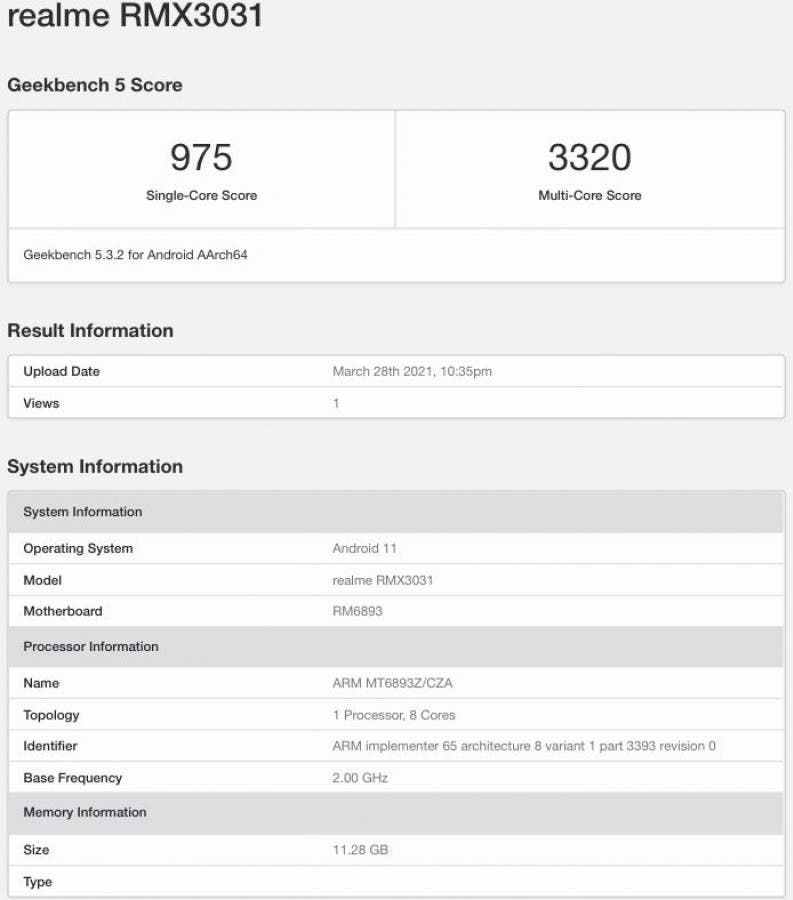 As per the GeekBench listing, Realme GT Neo will arrive with an ARM chipset having eight cores and a base frequency of 2 GHz. We already know that the device will arrive with a Dimensity 1200 chipset. The chipset will be paired with a 12GB of RAM and this is the first time we’re hearing about GT Neo with this much memory. The smartphone also runs on the latest Android 11 operating system. Coming to the benchmark scores, we’re looking at 975 points for a single-core performance and 3320 points for a multi-core benchmark.

To recall, the device will bear the model number RMX3116 and a 6.55-inch curved display. Under the hood, the device will make use of a 4,400mAh battery packed inside. We’re also looking at the 5G connectivity support.

Another smartphone in the company’s belt!

Apart from Realme GT Neo, it looks like Realme is planning to launch another smartphone alongside under the V series. The device will arrive with the moniker V13 5G. Realme V13 5G will run on Deminsity 700 5G chipset that is based on 7nm manufacturing process. The chipset is paired with an 8GB RAM and 128GB built-in storage. We might also see a variant with 256GB onboard storage.

The device will have four cameras on the rear but sadly, there’s no information on the sensors. The device also comes with a punch-hole display with 90Hz refresh rate. On the software front, we’re looking at an Android 11 operating system with Realme UI 2.0 skin on top.  All of these are backed by a large 5,000 mAh battery packed inside.

In terms of pricing, the device should wall somewhere between CNY 1,500 and CNY 2,000 ($230-$300). Surprisingly, it soing to be an offline exclusive smartphone. It would be interesting to see whether it would make its way to the global market down the road or not.

Next Galaxy Tab A7 Lite render images and specs surfaces on the web!