TCL announced yesterday that it will hold a “global event” on April 14 where it plans to unveil new mobile products. Unfortunately, the company announced only the event, and they’re still no info regarding the products coming at the event. However, we have some leaks to speculate about. We believe that the company is about to add the remaining devices in the TCL 20 series that made its debut at CES 2021 in January. Today, another device that is part of the TCL 20 devices, but that was absent at CES, passed by Bluetooth SIG certification with the TCL 20L Plus moniker, or TCL 20L+. 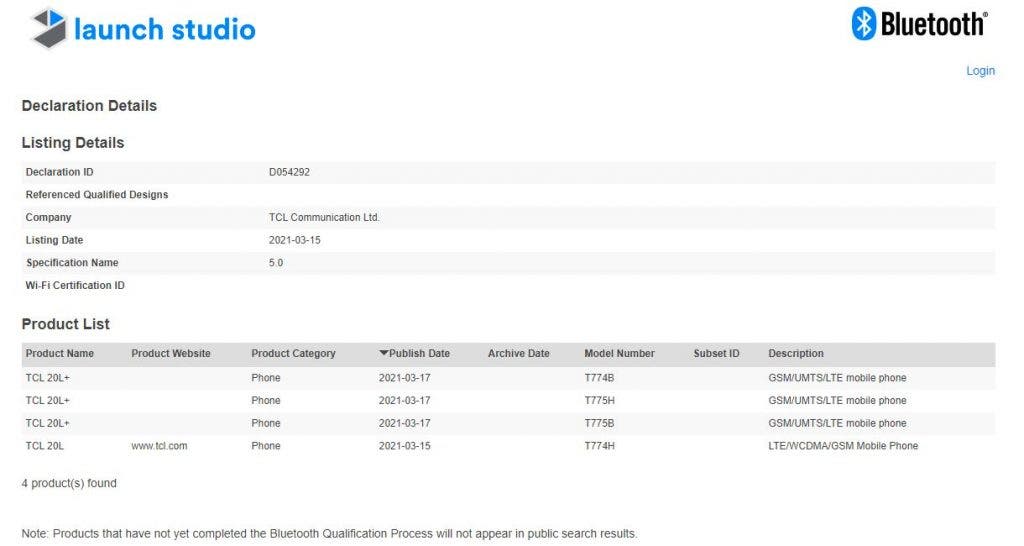 The TCL 20L was revealed earlier this year, but we haven’t heard anything about the new Plus variant until today. The new model is the TCL 20L Plus and it is stylized as TCL 20L+. The device was certified by Bluetooth SIG certification a couple of weeks ago. The certification page has model numbers T774B, T775H, and T775B. It means there are three possible variants coming soon. Moreover, all three devices are 4G smartphones and have Bluetooth 5.0. This further confirms our belief that only the TCL 20 Pro 5G offers the next-gen network support.

TCL 20L Plus a better smartphone, or just a bigger version?

The TCL 20L itself and the TCL 20S and TCL 20 Pro 5G are three distinct smartphones. These devices were scheduled for a later release when they were first announced at the CES 2021. We want to believe that the new TCL 20L+ may be a better-specced version of the TCL 20L. In the worst-case scenario, it will be just the same device with a bigger display.

From the image provided by the company, the TCL 20L has a flat-screen with a centered punch hole. We assume that this is an LCD, hopefully, with a high refresh rate screen with at least a 90Hz refresh rate. However, as a device in the mid-range class, we can set this in stone just now. The Plus model may also come with a bigger battery capacity. In any case, we expect the TCL 20L+ as well as standard variants to have Android 11 straight out of the box. The phone probably boasts the newer Snapdragon 678 chipset or something below.

We don’t think that the SD700-series chip will make an appearance here. After all, the high-tier version of the TCL 20 Pro 5GG will have a Snapdragon 690 5G chipset. It also has 6GB of RAM and is available in variants with 128GB and 256GB of Internal Storage.