Sometime last month, Google officially released the second Android 12 developer preview. This system is for developers and it gives us an insight to many features that are on their way. There is a new Pixel Launcher search widget that allows users to search for apps, contacts, settings, etc. on the device. This launcher is not entirely new to the Android system. However, it appears that the search widget will no longer be exclusive to the Pixel Launcher. 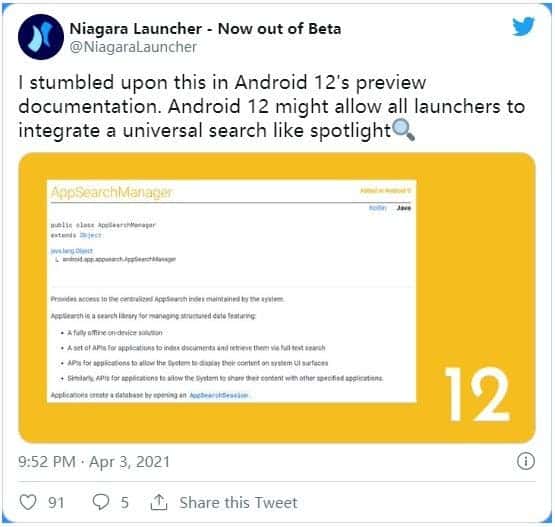 It further emphasizes that the AppSearch index is a search library for managing structured data. The characteristics of this feature are

Basically, this feature is now a traditional alternative to a couple of global search applications. The interesting part of this feature is that it gives users the opportunity to search for technically anything on the device instantly. As of now, the reports on this feature integration are incomplete. However, we expect for information regarding this feature in the upcoming Android 12 developer preview.

It is worth mentioning that OnePlus has already provided a similar general search function on its native launcher app, but it is limited to specific markets.

From the Android 12 release schedule, this system will be available publicly after August 2021. It will enter the public beta phase by May 2021. Following the usual trend, in the beta phase, some Chinese smartphones will be part of the upgrade. The likes of Xiaomi and OnePlus are sure to take part in the first public beta release.

In the official log, the main changes of developer preview 2 compared to  developer preview 1/1.1 are focused on the convenience of developers. There are too many bugs in the actual functions and interfaces. However, a couple of features are not entirely ready for public testing. Features such as round corners support, picture-in-picture animation function and others need more work.