Statistics compiled by the International Data Corporation (IDC) indicate that in the first quarter of this year, the supply of personal computers in the global market increased sharply. PC shipments has skyrocketed despite the shortage of components.

The data includes shipments of desktops, notebooks of various classes, and workstations. Tablets and servers with x86 architecture does not enter in this report. 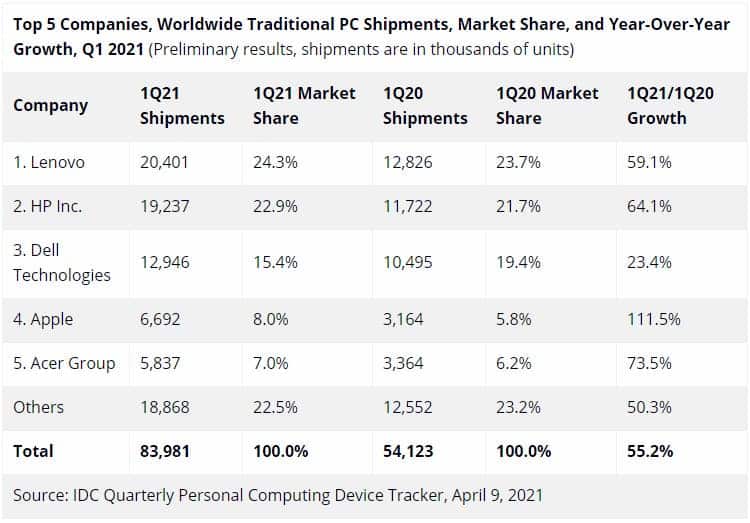 In the period from January to March inclusive, 83.98 personal computers were sold globally. This is an impressive 55.2% more than in the first quarter of 2020, when shipments were 54.12 million units.

“Unfulfilled demand from the past year has carried forward into the first quarter and additional demand brought on by the pandemic has also continued to drive volume,” said Jitesh Ubrani research manager for IDC’s Mobile Device Trackers. “However, the market continues to struggle with setbacks including component shortages and logistics issues, each of which has contributed to an increase in average selling prices.”

Analysts note that the market is growing at an accelerated pace; despite the shortage of electronic components and disruption to supply chains. The observed picture is explained by the expansion of the computer fleet in the context of distance learning and remote work. 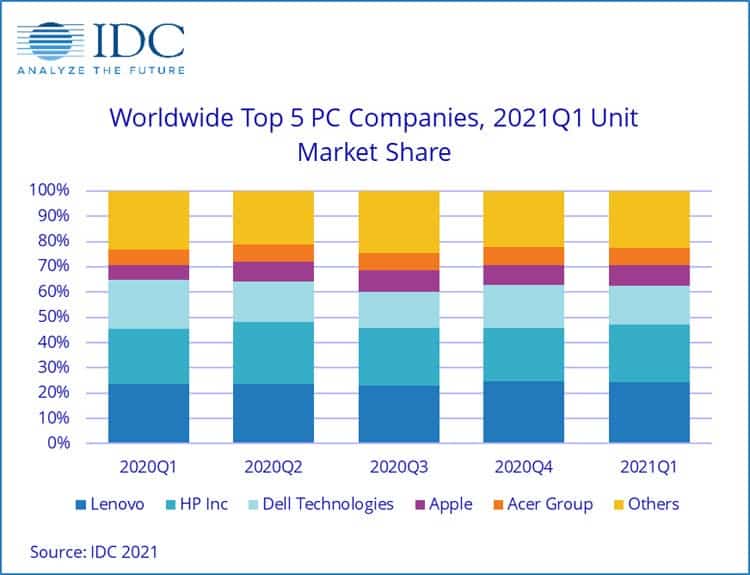 In the first place in the ranking of leading suppliers is Lenovo, which controls almost a quarter of the global PC industry – 24.3%. Next comes HP with 22.9%, and Dell closes the top three with 15.4%. Another 8.0% belongs to Apple, about 7.0% – by Acer Group. Thus, the total share of all other market players is approximately 22.5%.

“There is no question when entering 2021 the backlog for PCs was extensive across business, consumer, and education”; said Ryan Reith, program vice president with IDC’s Worldwide Mobile Device Trackers. “The ongoing shortages in the semiconductor space only further prolong the ability for vendors to refill inventory; and fulfill orders to customers. We believe a fundamental shift has occurred around the PC; which will result in a more positive outlook for years to follow. All three segments – business, education, and consumer – are experiencing demand that we didn’t expect to happen; regardless of many countries beginning their ‘opening up’ process. Component shortages will likely be a topic of conversation for the majority of 2021, but the more important question should be what PC demand will look like in 2-3 years.”

Next LG Smartphones List That Will Get Android 11, Android 12 And Android 13 Updates