International Data Corporation (IDC) published the results of a study of the global personal computer market in the first quarter of this year. After rapid growth, the industry began to decline.

In previous quarters, the increase in demand was attributed to the pandemic, with users around the world needing more computing hardware in a hybrid or telecommuting and learning environment. Now the market is saturated, and, in addition, the shortage of electronic components has a negative impact on the industry. The PC market is coming off two years of double-digit growth, so while the first quarter decline is a change in this momentum, it doesn’t mean the industry is in a downward spiral. The 1Q22 volume marks the seventh consecutive quarter where global shipments surpassed 80 million, a feat not seen since 2012. 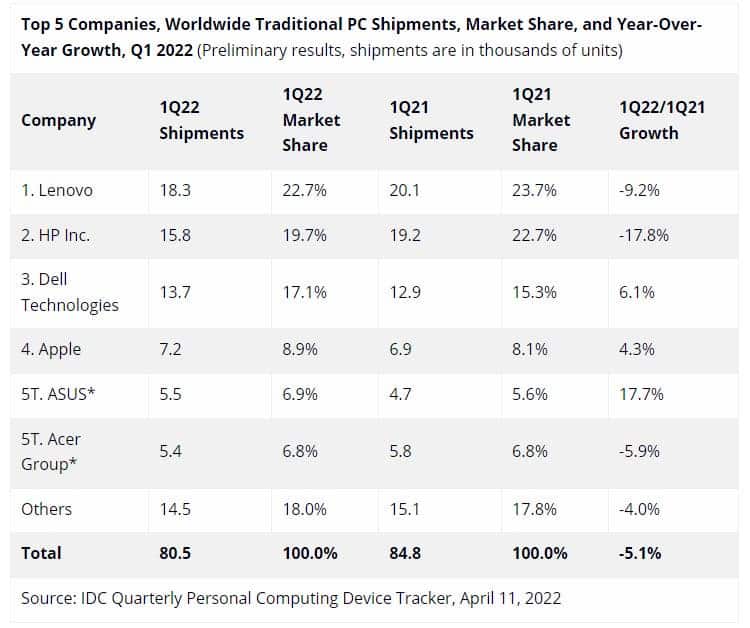 “The focus shouldn’t be on the year-over-year decline in PC volumes. The focus should be on the PC industry managing to ship more than 80 million PCs at a time when logistics and supply chain are still a mess, accompanied by numerous geopolitical and pandemic-related challenges,” said Ryan Reith, group vice president with IDC‘s Worldwide Mobile Device Trackers. “We have witnessed some slowdown in both the education and consumer markets, but all indicators show demand for commercial PCs remains very strong. We also believe that the consumer market will pick up again in the near future. The result of 1Q22 was PC shipment volumes that were near record levels for a first quarter.”

In the first quarter of this year, worldwide PC shipments amounted to 80.5 million units. For comparison: a year earlier, sales were 84.8 million units. Thus, a fall of 5.1% took place.

“Even as parts of the market slow due to demand saturation and rising costs; we still see some silver linings in a market that has reached an inflection point towards a slower pace of growth;” said Jay Chou, research manager for IDC’s Quarterly PC Monitor Tracker. “Aside from commercial spending on PCs, there are still emerging markets; where demand had been neglected in the earlier periods of the pandemic; and higher end consumer demand also has held up.”

Previous Elon Musk Resigns from Twitter Board of Directors

Next MIUI 13: Xiaomi is rolling out the Android 12 update to the Mi 10T Pro