International Data Corporation (IDC) has summed up the study of the global computer monitor market in the last quarter of last year and 2021 as a whole. The industry has shown mixed results.

Between October and December, 37.3 million monitors were sold globally. This is a 5.2% decrease compared to the result for the last quarter of 2020; when shipments amounted to 39.4 million units.

The global PC monitor market continued its quarterly decline in the fourth quarter of 2021 (4Q21) with unit shipments shrinking 5.2% compared to the same quarter in 2020. Despite a challenging second half of the year, the market still exceeded expectations and ended 2021 with a 5.0% year-over-year growth rate 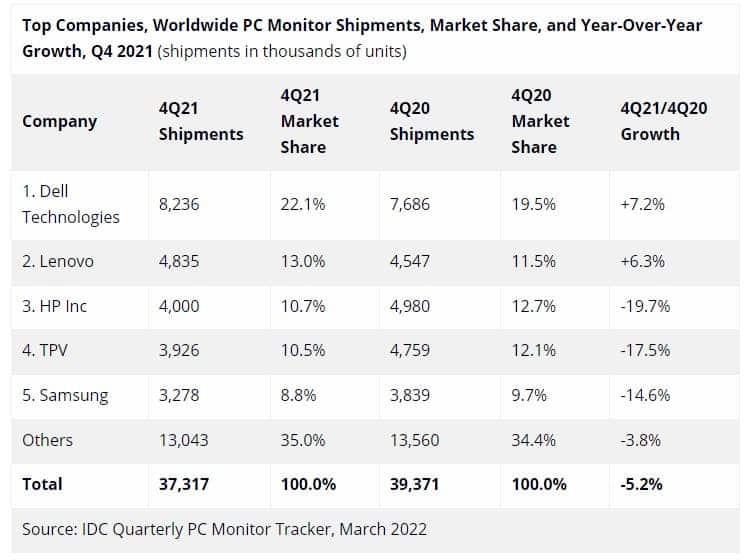 In 2021, 143.6 million computer monitors were sold worldwide, the highest result in the last nine years. The growth compared to 2020 was approximately 5.0%.

“2021 marked the end of the longest run for monitors, which saw an uninterrupted growth spurt from 2018 to 2021,” said Jay Chou, research manager for IDC’s Worldwide Client Devices Trackers. “Whether it was businesses refreshing PCs and monitors as they moved towards Windows 10 or the pandemic pivot towards work from home, these developments gave a much-needed boost to what had been a staid industry. However, we now see growing saturation, inflationary pressures from the pandemic and the Ukrainian crisis further accelerating an already cooling environment in 2022, when we expect monitor shipments to shrink 3.6% and then stabilize after.” 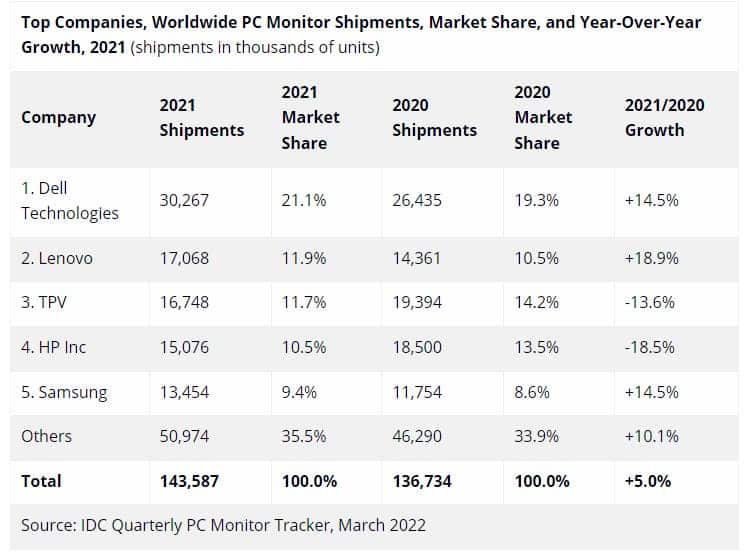 Dell and Lenovo emerged as the only two companies in the Top 5 to deliver shipment growth in 4Q21. Although overall commercial shipments declined 2.2% year over year in the fourth quarter; the commercial portion of the market proved more resilient as it has throughout the year; showing only modest losses in the second half of 2021 as return-to-office trends continued to gain ground. Companies that had better control of their supply chain or a stronger presence in emerging markets fared better. Dell and Lenovo both outgrew the market and registered upper single digit year-over-year growth. Lenovo also overtook HP as the number 2 vendor for the quarter. Consumer-focused vendors suffered even more as the total consumer monitor market shrank more than 8% year over year.

Next The global voice note player arrives on Whatsapp for Android