Are you listening to an audio clip and in the meantime you would like to reply to some messages sent by other contacts or read what happened in the group chat of soccer? No problem, now it can be done. Or almost, in the sense that the global player for listening to voice messages was initially discovered last fall in the whatsapp beta app for iOS; and then also appeared on Android some time later. In both cases they were initial tests, not even visible in beta except with activations through the code. Now things are finally starting to move.

The reference system of today’s feature is Android, the beta 2.22.8.7 (for the Business version the 2.22.8.7 and 2.22.8.8). To an increasing number of beta testers the voice player is appearing outside the individual chats, positioned at the top of the screen and therefore visible when you exit the conversation from which the message comes.

The global voice note player arrives on Whatsapp for Android

As reported by WABetaInfo, the best way to understand if the function is activated on your smartphone is to do a test: start a voice message, exit the chat and check if the new player appears at the top, which as shown in the image has the pause button on the left, the X to close it on the right and the sender’s name in the center. 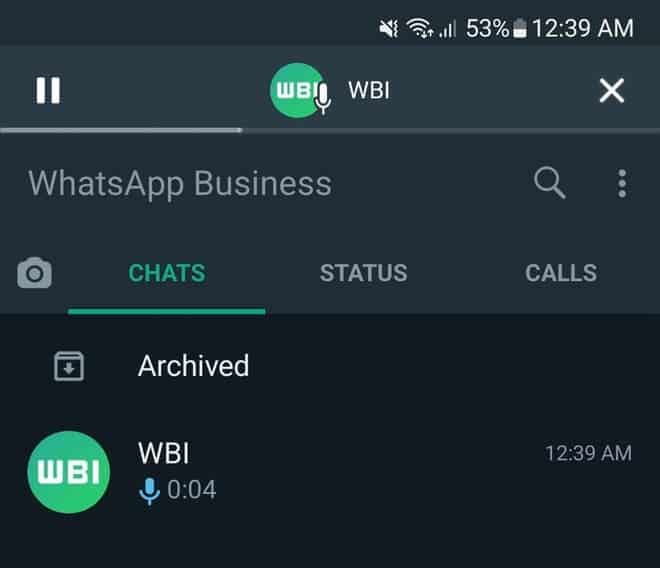 If you have WhatsApp Beta installed on your Android smartphone, take a look to see if the player appears – after checking that you have the latest beta available, of course. If not, give a few hours of time. Also, if the feature refuses to show itself, be patient and wait for the next Beta. Given the time between releases, it will certainly not be long.

The team of the popular WhatsApp messenger continues to improve the service. The messenger recently began to test the transfer of files of a much larger volume than was previously possible.

The thematic resource WABetainfo told about the new function. It has already become available to some users as part of the WhatsApp beta testing program for both Android and iOS.

The service has been allowing file transfers via chats since 2017. However, it was possible to transfer not too large volumes – up to 100 MB. Until now, this limit has not changed. Now “selected” beta testers can transfer just huge files – up to 2 GB in size. It is not yet clear when testing will end. Also, the launch date in stable versions of WhatsApp is unknown.