Starting today, the Xiaomi Mi 11 Ultra has begun getting the MIUI 12.5 development version update over the air. The version number of this update is MIUI V12.5.3.0.RJBCNXM, and the update package is about 937Mb in size. 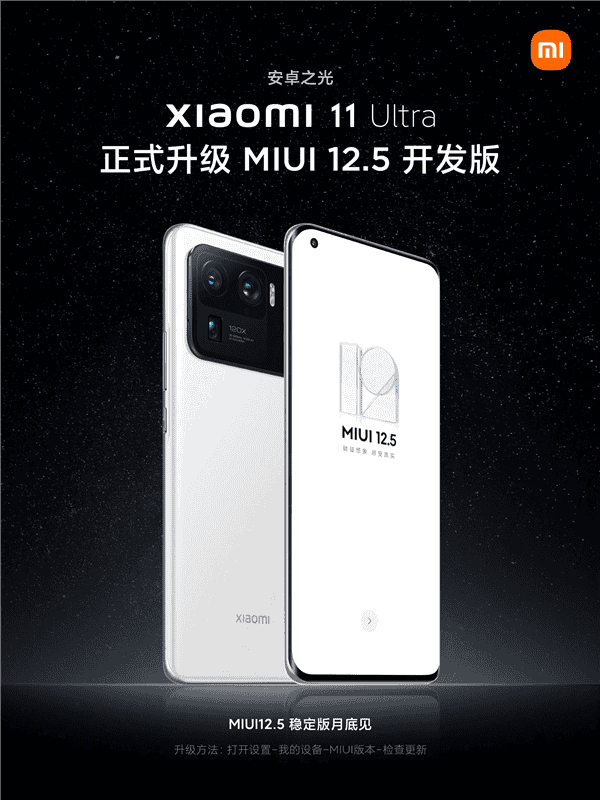 Xiaomi released the latest generation of MIUI 12.5 system in December last year. The manufacturer proves that this upgrade is no less than a major version update.

The new MIUI 12.5 has been greatly improved and optimized in terms of security and privacy. But it also brings super wallpaper, dynamic design, tactile design, system optimization, etc. The experience is comparable to Apple iOS.

It is worth mentioning that MIUI 12.5 is also the first Android system to fully enable the sandbox mechanism.

After updating, the Xiaomi Mi 11 Ultra will become unreachable for many Android flagships. At the same time, the Mi 11 Ultra also has a number of world-first brand-new technologies, including the first second-generation nano-silox anode battery, the first “solid-liquid-gas three-state three-dimensional heat dissipation system” and the industry’s largest bottom sensor jointly developed with Samsung.

The Xiaomi Mi 10 Ultra has started getting the stable version update as well. But this is not accidental. We mean it’s the strongest model of the company in 2020.

What About The Rest Models?

Earlier, on the Mi Fan Open Day, Xiaomi said that the MIUI 12.5 stable version will be released in full on April 30.

The first batch of models includes the Mi 9 SE, Mi 10, Mi 10 Pro, Mi 10 Ultra and Mi 11. The MIUI 12.5 stable version for the Xiaomi Mi 11 Ultra has been scheduled for the second batch. It will not be available until the end of May.