Samsung appears to be not so happy with its current product portfolio that has like eight different lineups in the smartphone segment alone. Well, the South Korean giant is now planning to bring a new smartphone dubbed Galaxy Jump 5G. Considering the moniker, it looks like the device is not gonna fall between any of the company’s existing lineup. This means that we’re looking at a potentially new series altogether. Well, Galaxy Jump has now appeared on Google Play Console, revealing some key specs. 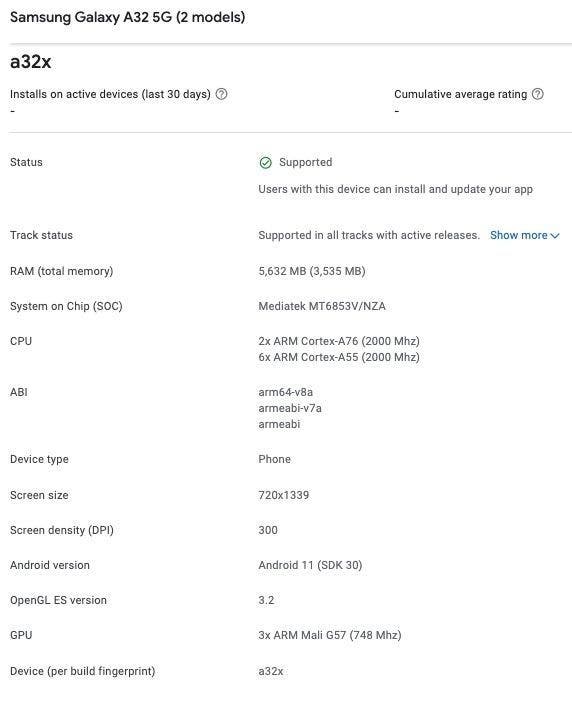 The Google Play Console listing has revealed various details surrounding the new smartphone. As per the listing, we’re looking at a MediaTek Dimensity 720 chipset paired with up to 6gB RAM and up to 128GB built-in storage. For those who’re unaware, the Dimensity 720 chipset consists of six Cortex-A55 cores and two Cortex-A76 cores. Galaxy Jump is equipped with an HD+ display with a resolution of 720 x 1339 pixels. The display also has a pixel density of 300 PPI along with a waterdrop notch.

Of course, the notch houses the front selfie camera, and here we’re looking at a 13MP front snapper. On the rear, there is a quad-camera module featuring a 64MP primary sensor, an 8MP ultrawide lens, a 5MP macro, and a 2MP depth sensor. A couple of days ago, the Galaxy Jump also made an appearance on the Bluetooth SIG listing for certification.

Considering these recent appearances on regulatory bodies, it looks like Samsung is close to launching the smartphone. If that’s the case, then we should expect more information to surface in the coming days or weeks.

What’s surprising is the fact that the Google Play listing also mentions the A32x keyword. Well, it looks like the Galaxy Jump is a rebranded version of Galaxy A32 5G. This would make sense as Samsung hasn’t yet launched the device in markets such as India. Samsung might be planning to bring the device with the Galaxy Jump moniker. There’s no idea as to why the company would want to do this but it looks like that might actually happen. Galaxy A32 is a 5G smartphone while the coming Galaxy Jump is also claimed to support the latest connectivity option.

Previous Samsung next foldable smartphone to have under-display camera, more devices with this tech coming in H2 2021

Next Galaxy M32 is Samsung's upcoming device with big battery underneath!