Apart from Galaxy Jump, Samsung appears to be working on a new budget smartphone dubbed Galaxy M32. Over the last couple of generations, Samsung has managed to incorporate big batteries in both of its M and A series devices. In fact, the company managed to take things up a notch with its Galaxy F62 and Galaxy M51. For those who’re unaware, both these devices packs in a massive 7,000 mAh battery under the hood. It looks like chaebol’s upcoming M32 will also feature a big battery. 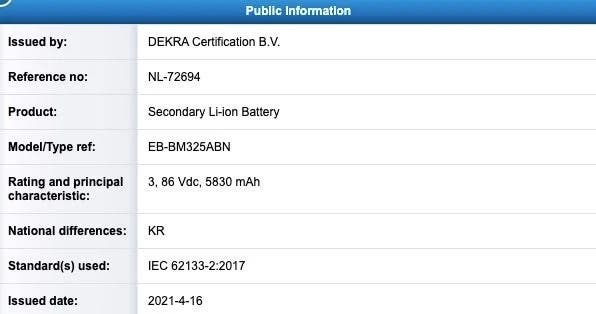 According to a new report by SamMobile, Samsung has now received certification from DEKRA for its new battery. The battery bears the model number EB-BM325ABN. Looking at the model number, it looks like this battery is designed for the Galaxy M32 smartphone. The listing suggests that this battery has a rated capacity of 5,830mAh. Considering that, Samsung would end up marketing it as a 6,000mAh battery.

If that’s the case, then Galaxy M32 would become the company’s other smartphone that comes with such a battery capacity. Considering the capacity, it looks like the device would be capable of lasting up to 2 days on a single charge. Of course, it largely depends on the usage. At the time of writing this, the information surrounding the Galaxy M32 is a bit scarce. We expect to hear more about this new upcoming smartphone in the coming weeks or months.

It is worth noting that there is a high chance that Galaxy M32 would most likely be based on the previously launched Galaxy A32. To recall, the Galaxy A32 was launched with a 6.4-inch Super AMOLED panel having a 90Hz refresh rate. The device runs on a MediaTek Helio G80 chipset under the hood. We’re also looking at a quad camera on the rear and a single 20MP selfie shooter on the front. Other features include Android 11 with One UI 3, WiFi 5, Bluetooth 5, Type-C port, and a headphone jack.

Samsung has much more in its sleeves!