Chinese manufacturer, Realme will release the Realme Q3 series at 19:30 on April 22. Today, Xu Qi, vice president of Realme, released a real image of the Realme Q3 Pro. The image of this phone shows the self-luminous fluorescent logo on the rear which he calls “firefly”. This is actually the first smartphone in the industry with such a design. 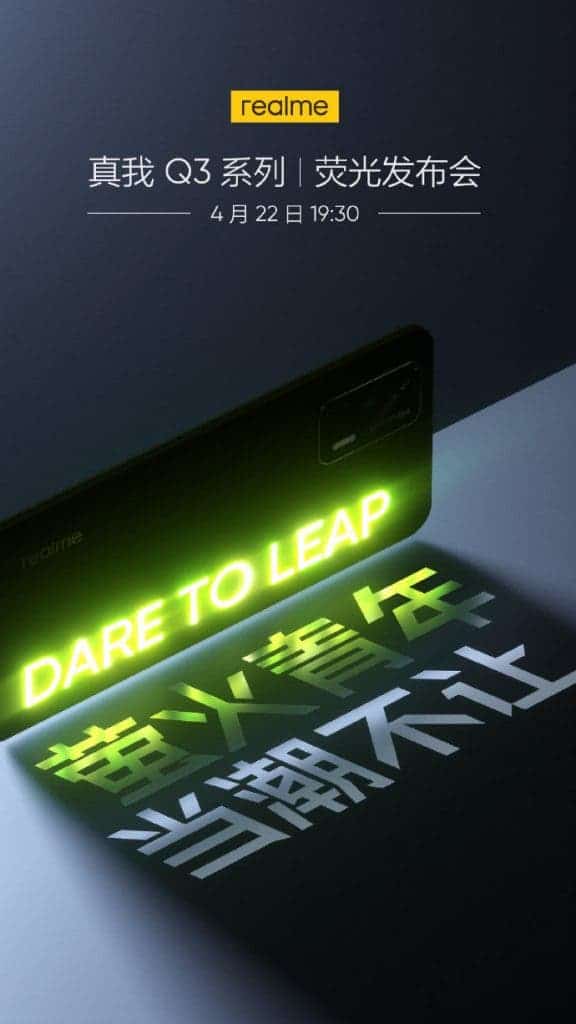 According to reports, the design of the machine is inspired by the unconstrained Y2K culture. For the first time, Realme combines luminous materials with fluorescent colors. After fully absorbing sunlight, the words “Dare To Leap” on the back cover of the mobile phone will show a fluorescent effect like a firefly in the dark.

According to previous reports, a certain version of the series will use the MediaTek Dimensity 1100 chip. This smartphone will come with a 120Hz display as well as a built-in 4500 mAh battery that supports a 50W fast charge. However, inside the box, we will have a standard 65W charger. As for the price, the company claims that the pricing will be very “brutal”. There have been reports that the price will be in the “thousand yuan” range. This means that this smartphone will not be more expensive than 1999 yuan ($307).

According to @DigitalChatStation, the Realme Q3 Pro will use a 6.43-inch FHD+ high-brush AMOLED screen. This display also comes with a single punch-hole in the upper left corner. On the rear, it will have a main 64MP camera in a triple camera setup. Despite the 4500 mAh battery, the overall thickness of this smartphone is just 8.4mm.

Looking at the overall design of this smartphone, it appears like a flagship device that will sell for less. The company is quite confident with the performance of the rear self-luminous fluorescent logo. However, some users may be wondering if this feature will not consume the battery of the device, Realme assures users that the self-luminous fluorescent logo does not consume the phone’s battery at all. We will have to wait a few more days for the official launch of the Realme Q3 series.

Source/VIA :
In Chinese, In Chinese 2