In recent weeks, there has been a lot of frenzy regarding the world’s most popular cryptocurrency, Bitcoin. This is simply because there has been a huge fluctuation in its price. Since March 5th, Bitcoin has been recording a consistent rise. At some point, one Bitcoin was selling for over $65,000. However, over the past few weeks, the price of Bitcoin dropped sharply and even fell below the $50,000 mark. 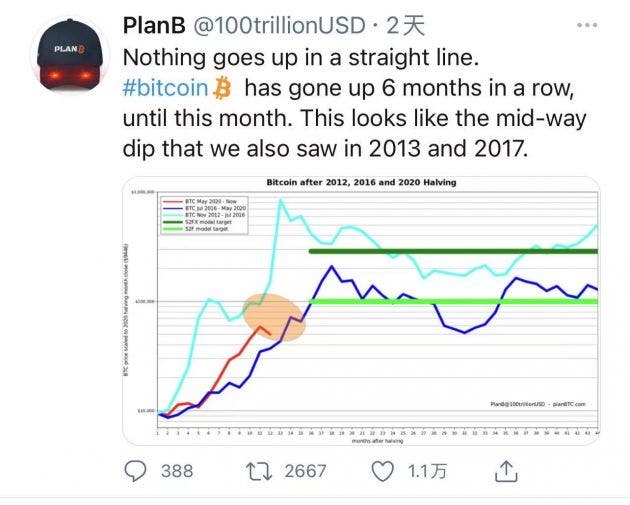 Popular cryptocurrency analyst, PlanB, took to his Twitter account to explain the situation with Bitcoin. According to PlanB, the fall in Bitcoin price does not necessarily mean its market is over. PlanB is known in the cryptocurrency industry for his Bitcoin Stock-to-Flow (S2F) model. This model essentially predicts that the price of Bitcoin will rise as its halving and scarcity increases.

According to Data from TradingView, in the past few months, the price of Bitcoin has surpassed its all-time high, around $65,000. In the next few days, it continued to fall, reaching nearly $47,100 on April 25, a drop of about 28%. However, according to PlanB’s tweets, this trend is roughly the same as the previous market cycle for this coin.

He said: “Nothing goes up in a straight line. Bitcoin has gone up 6 months in a row, until this month. This looks like the mid-way dip that we also saw in 2013 and 2017.”

He also released a Bitcoin price chart. In the context of a larger macro market cycle, previous markets have seen sharp corrections. In 2012, 2016, and 2020, the price of this crypto money halved. However, there was a market in 2013, 2017, and 2021, which can be described as a big drop or a big rise. For example, in September 2017, it fell by about 40% after a sharp rise but continued to set new highs in the following months.

This is the first time since March 5th that the price of Bitcoin will be dropping so low. The President of the United States plans to nearly double the capital gains tax rate for the wealthy to 39.6%. Together with the existing investment income surcharge, this means the federal capital gains tax rate for investors. The highest will reach 43.4%. As soon as the news hit the public, Bitcoin fell in response.