For about two years, the top position in the Indian smartphone market has been for a single company. In fact, there has been no real threat by another company to take the top spot from Xiaomi. Canalys latest report shows the smartphone shipments in the Indian market for the first quarter of 2021. According to the report, the Indian market records an 11% growth rate, rising to 37.1 million units. 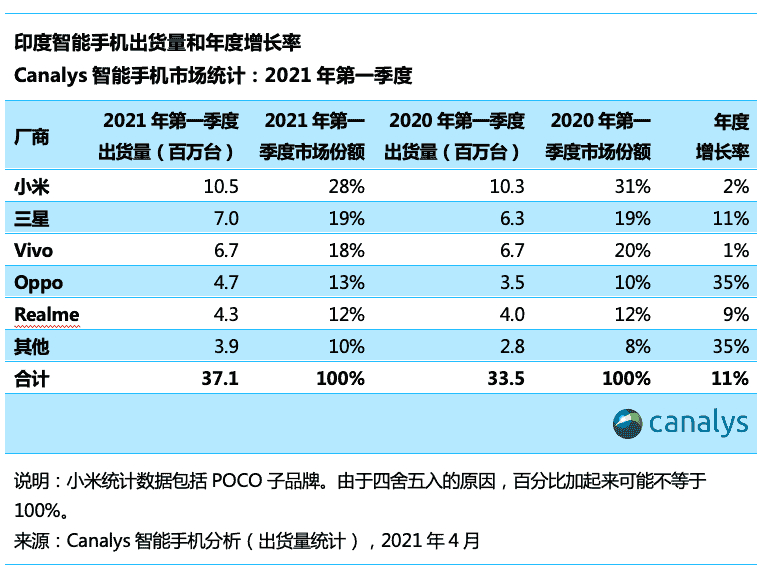 From the report, Xiaomi continues to maintain its leading position in the smartphone market. In the first quarter of 2021, Xiaomi shipped 10.5 million units which accounts for a 28% market share. Samsung came in second with shipments of 7 million units, but its market share fell from 21% in the previous quarter to 19%.

Canalys predicts that the second wave of the coronavirus pandemic will affect the Indian smartphone market. According to its report, the sales of smartphones in the second quarter of 2021 in India will drop sharply.

The Indian smartphone market is a very technical market that has so much focus on budget devices. This market is not a place where flagships or expensive devices thrive. This is why we don’t see the likes of Apple or OnePlus on the list.

Earlier this month, there were reports that India plans to provide more than $1 billion in cash subsidies to each semiconductor company that establish a manufacturing department in the country. The government is making efforts to strengthen the country’s electronic supply chain.

The “Made in India” plan of the Prime Minister of India has helped the country become the world’s second-largest mobile phone manufacturer after China. India believes that it is time to attract semiconductor companies to expand production locally in India.

A senior government official said: “The government will provide more than $1 billion in cash subsidies to every semiconductor company that will set up a manufacturing department. We assure them that the government will become a buyer, and in the private market, companies will also be encouraged to buy locally manufactured chips“.

Next Upgraded Chuwi CoreBook X coming in early May