Though Huawei has serious difficulties with designing and manufacturing smartphones, other businesses of this company run as planned. Say, in a few days, on May 19, the company is going to uncover the Huawei FreeBuds 4 true wireless headsets. It will make a tough competition to all existing TWS headsets on the market.

Prior to this, we have seen the rendering of the headsets that spotted on the promo poster. From it, we can see that the overall design of the Huawei FreeBuds 4 headset and charging box are similar to the previous generation Huawei FreeBuds 3. 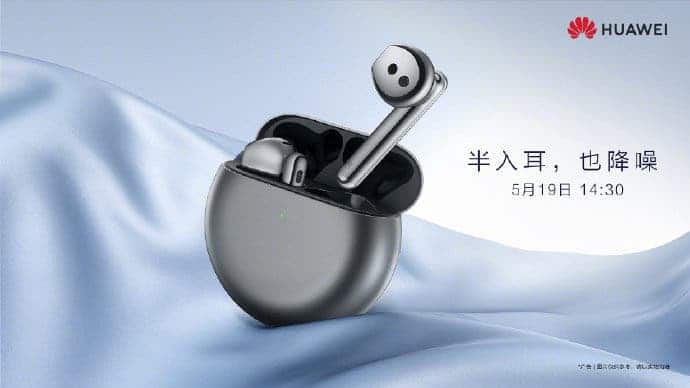 Today, a Weibo blogger released a number of real shots of the headset. At the same time, the source revealed that this headset is smaller and lighter than the FreeBuds 3. Now, it is more in line with the design of human ears. Plus, this product should come with a stronger noise reduction capabilities. At the same time, our protagonist will retain the previous generation sliding tuning and other functions.

Previous leaks prove that the Huawei FreeBuds 4 will focus on the “comfortable noise reduction” function. From the Huawei Mall’s appointment page, we can see that the headset will be available in at least three colors of white, gray and red. But we have also heard that there will be two more colors of black and silver. In this sense, we are dealing with the silver version.

Apart from the Huawei FreeBuds 4, at the upcoming event, the manufacturer will also release several other products. Among them, we can mention new TVs, earphones, and smartwatches. But we are also waiting for a top-end notebook and a new Mate-branded tablet.

Will Huawei FreeBuds 4 Inherit The Kirin A1 Chip?

As the true wireless headsets market doesn’t develop actively, it’s not logical to wait for many improvements. So most of the previous generation model will be remain unchanged. Say, the Huawei FreeBuds 3 comes the Kirin A1 chip, which makes the FreeBuds 3 performance be 30% higher than Apple’s AirPods. Plus, it ensures a 50% lower power consumption, and its package size is 95% of AirPods. More importantly, Huawei’s chip comes with a new Bluetooth protocol: BT-UHD. Simply put, when the earphones are used with a new Huawei phone running EMUI 10.0 or higher, both devices will establish the connection using this new standard. The latter has a data transfer rate of up to 2.3 Mbps. For reference, the LDAC codec “only” provides 990 kbps.

Next Honor Play 5 confirmed to use a 6.53-inch OLED HD screen