According to Counterpoint Research, the global smartphone market shipment revenue for the first quarter of 2021 exceeds $100 billion. This is a new record high and the actual shipment revenue for Q1 2021 is $113 billion. This sale is driven by major manufacturers like Xiaomi, Oppo, Vivo, and Apple. The global smartphone shipment increased by 20% year-on-year to 354 million units. 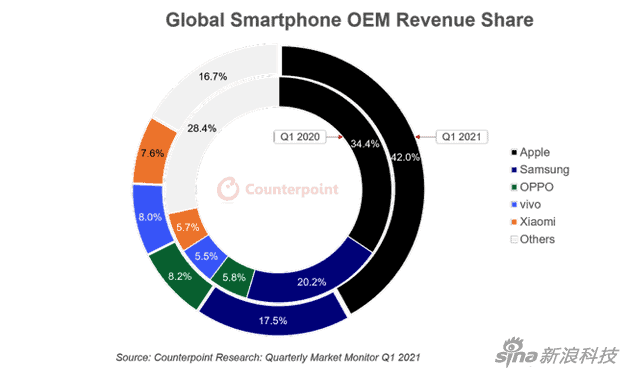 The large increase in the annual growth rate is partly due to the poor sales in the same quarter of 2020. Last year was a terrible year for all manufacturers. Thus, there is usually a year-on-year increase. The smartphone market can be worse than last year except there is another pandemic. Despite the supply shortage, this quarter, the industry supply chain has prioritized the top five brands. This enables them to launch flagship products earlier than the usual cycle. This special treatment allows them to improve their performance.

Due to the strong performance of the iPhone 12 series, Apple gained a record first quarter revenue share. Its high-end version, iPhone 12 Pro Max, is also very popular in countries/regions such as the United States and Europe. This device also contributed massively to Apple’s revenue growth.

Manufacturers such as Xiaomi, OPPO, and Vivo had flagship series such as Mi 11, Find series and X60. This also enabled them to post record shipments. Xiaomi, OPPO, and Vivo have set a record high global market share globally as well as in China, Europe, Latin America, and South Asia. These three brands have filled the gap left by Huawei and are in a favorable position in the further development of these regions.

Tarun Pathak, Research Director of Counterpoint Research, said: “Semiconductor shortages have affected the overall supply landscape and extended chip delivery times. However, we see that these suppliers are seeking diversified foundry strategies to reduce chipsets in the second half of this year. These shortages may increase the price of specific parts by 5-10%, and mobile phone manufacturers will absorb these cost increases by innovating with the bill of materials (BoM), and in some cases may also pass on the increased costs. In the long run, to avoid repetitive geopolitical issues, countries will invest in upgrading domestic supply chains. This will reduce dependence on a few manufacturers”.

Samsung’s growth in revenue and shipments is mainly due to the success of its S21 series. The company has also been quite successful in the foldable smartphone market.  However. its foldable smartphone lineup now has serious competition. The likes of Huawei Mate X2 and Xiaomi Mi MIX Fold will give it a good run for its money. Furthermore, we expect foldable devices from other companies like Vivo, OPPO, and TCL.