Nokia is focusing on its budget-oriented smartphones. The Finnish company is expanding its all-new C-series lineup. Previously, we saw the sketches of the upcoming Nokia smartphones reportedly named C20 Plus and C30. Today, the C20 Plus has gone through GeekBench listing giving us an idea of what we can expect from the device. The Geekbench listing reveals that the C20 Plus will have more RAM compared to the vanilla model although it might have a similar processor.

Thanks to the GeekBench listing of the Noia C20 Plus, we now know its operating system, chipset information and memory details. The Nokia C20 Plus comes with an Android 11 operating system. Being from the C-series, we are hoping to see the Android 11 GO version on this smartphone. Android 11 GO ensures a smooth experience with minimum hardware required. Coming to CPU information, the GeekBench listing doesn’t reveal the exact model however it confirms the presence of a UNISOC chip. It has 8 cores clocked at a base frequency of 1.20GHz. 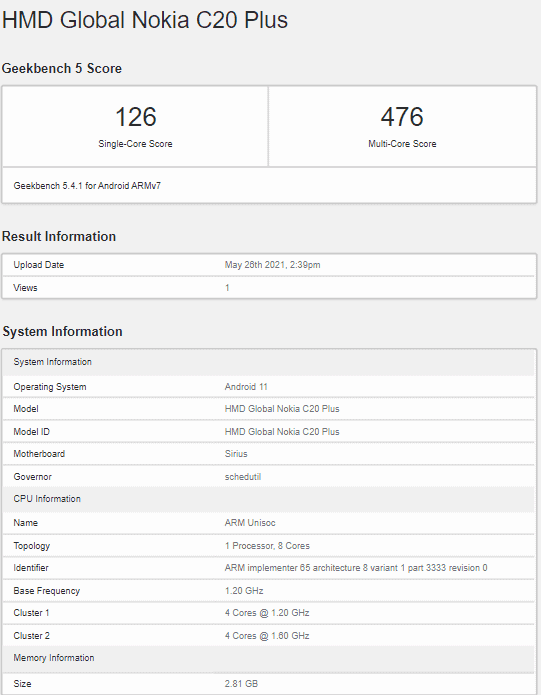 With a single-core score of 126 points and a multi-core score of 476, we know it won’t be a powerful phone. But to remind you, this is not a phone for performance but just day-to-day tasks like calling and messages. Now if we compare this score to the previously launched Nokia C20, it ain’t much different. The vanilla Nokia C20 scored a single score of 126 and a multi-core score of 473 which hints that both smartphones might have the same chipset. But the Nokia C20 Plus will ace in the memory department. According to Geekbench, the Nokia C20 Plus has 3GB RAM unlike the 2GB on the vanilla model. It is good to see 3GB RAM which will make it more future-proof compared to the 2GB model. 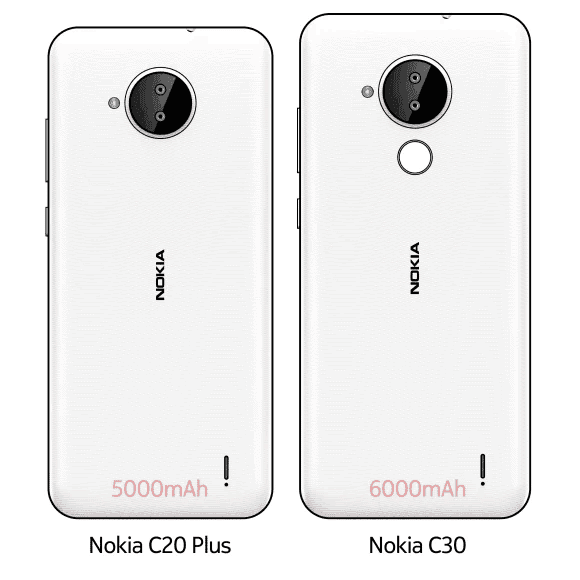 Some sketches of the upcoming Nokia smartphones surfaced online giving us a good idea of the design we will see. Both of the devices look very similar. Although, the fingerprint scanner is not present on the C20 Plus. Apart from that, both feature a dual rear camera setup. The speaker grill can be found on the bottom while the 3.5mm headphone jack is on the top. One of the biggest features of the C20 Plus will be its massive battery. Nokia C20 Plus will feature a 5000mAH battery and the C30 will have a 6000mAH battery. For comparison, the vanilla C20 has a 3000mAH battery. An additional 2000mAH battery and more RAM will make the Plus model a better device.

Read also: NOKIA C20 PLUS AND NOKIA C30 TO COME WITH HUMONGOUS BATTERIES