We live in an era of oversupply. There is always a choice and each of the products has its own counterparts. Therefore, the brand war will never end. And it is not easy to win in it, there will always be one that suits consumers more and more.

People’s love is fleeting and changeable. There is always a risk of stumbling and losing your audience. The consumer is capricious and can easily change his preferences without any remorse. Especially if he is also bribed with a nice price. But each time has its own “heroes”, brands that look more preferable against the background of competitors.

Androidauthority conducted an interesting survey. They try to find out which brands of smartphones are now the favorite, which ones have the biggest audience. It turned out that almost a third show great loyalty to Samsung and there were 32.71% of those surveyed. 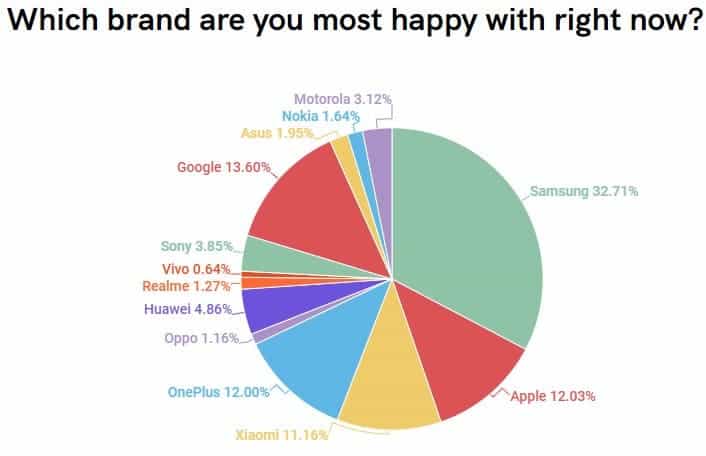 According to some recent reports from Counterpointresearch, China’s smartphone market saw realme’s Q1 2021 sales surge 82% QoQ and 451% YoY, making it the seventh biggest smartphone brand in the country, according to Counterpoint Research’s Market Monitor Service. Despite the China smartphone market growing only 5% in Q1 2021, realme continued to take market share from rivals, suggesting opportunity still exists in the market. OPPO, Xiaomi and vivo were the other prominent brands that made double-digit QoQ sales gains at the cost of Huawei and HONOR.

OPPO and vivo have engaged in a heated battle for the top spot in China’s smartphone market. The rise coincided with the fall of Huawei and newly spun-off HONOR, which struggled due to component shortages following US sanctions. As Huawei focused more on the premium segment, realme, OPPO, Xiaomi and vivo filled in the sizeable gap in the mid segment with timely product launches that ushered in a new generation of 5G capable devices. These brands also expanded their distribution presence with bifurcated efforts in online (driven by Xiaomi and realme) and offline (driven by OPPO and vivo) channels.

Commenting on the shake-up, Senior Analyst Yang Wang said, “realme grew at the fastest clip among major brands. Its distinctive yet effective marketing strategy appealed to budget-sensitive Gen Z audiences, who tend to look for premium features that support a social media, photography and gaming driven digital lifestyle. At the same time, the brand’s product portfolio kept pace with bigger established incumbents, in terms of product launches and key premium specs. At extremely competitive prices, the realme brand stood out among peers.”

Next Apple AirTag Getting Firmware Update To Fix Privacy Issues