According to analyst firm Gartner, in the first quarter of this year, global smartphone sales grew by 26%. The year-on-year growth was 22%. The pandemic began to recede, and consumers again began to willingly spend money on new devices. But in any case, sales have not returned to their previous level; and the indicators for the sale of mobile phones do not reach the level of 2019.

Samsung remained the leader in the first three months of this year, with a market share of 20.3% and 76.6 million smartphones sold. Apple came in second with 58.5 million iPhones sold. Rounding out the top three is Xiaomi, which controls 12.9% of the market with 48.9 million mobile phones sold. The fourth and fifth positions were taken by Vivo and Oppo, which sold more than 38 million handsets each.

All representatives from the top 5 showed sales growth against the background of the first quarter of last year, but if Apple’s main sales driver were the flagships of the iPhone 12 series, then Samsung and Xiaomi grew primarily due to an increase in demand for budget and mid-range models. Sales of mobile devices were positively affected by the growing demand for 5G-smartphones, which are increasingly increasing their market share. 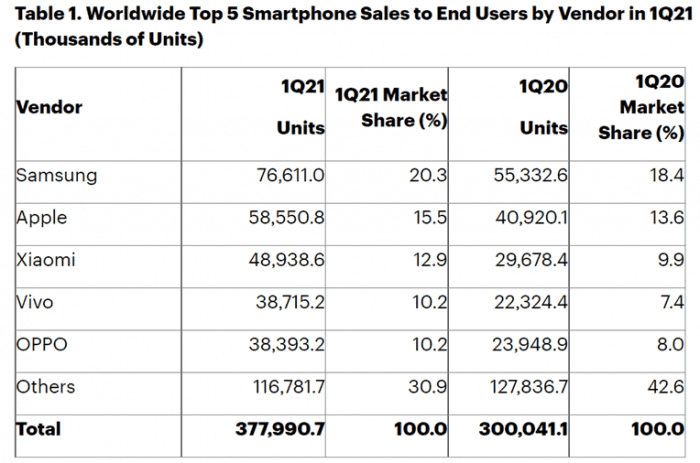 “The improvement in consumer outlook, sustained learning and working from home, along with pent-up demand from 2020 boosted sales of smartphones in the first quarter. Consumers started spending on discretionary items as the pandemic situation improved in many parts of the world and markets opened up,” said Anshul Gupta, senior research director at Gartner. “However, one cannot ignore that the base for comparison is also lower in 2020, than it was in 2019. This explains the double-digit growth.”

“5G will continue to be the major growth driver for Apple in 2021. Device upgrades will fuel demand for Apple’s flagship phone throughout the year,” said Mr. Gupta.

All of the top five global smartphone vendors registered strong year over year growth over 2020; indicating that the phone market is consolidating around the top five vendors. Chinese smartphone vendors Xiaomi, Oppo and Vivo witnessed growing demand for 5G smartphones and capitalized on the opportunities due to weakening sales of Huawei and LG globally in this quarter.

The global chip shortage has not yet impacted the smartphone industry as the demand and supply equilibrium is met. However, this may change in the coming quarters and may result in an increase in the average selling price of smartphones globally.