The OnePlus One was released in 2014 and we can say that it basically started the “Flagship Killer” trend. OnePlus used this term one year later with its OnePlus 2, but the device hadn’t the same appeal as its predecessor. The company was one of the first to bet in a “young and fresh” marketing campaign to build hype for a device with style and top-notch specifications that would revolutionize the market. We can say the only issue with the device’s release was the “invite-only” purchase system. Even though, the device managed to conquer a huge myriad of fans across the world.

Nine generations later, OnePlus is gearing up to live another adventure alongside Oppo. The company has three new flagship devices and a lot of mid-rangers, but everything started with the original One which still has a place in the heart of many OnePlus fans. In fact, some of these fans have more than that.

A few days ago, Xiaomi’s CEO, Lei Jun disclosed a very intriguing fact about the Mi 6 flagship smartphone. According to him, there are still more than 2 million active users of the smartphone. The Mi 6 was one of the best smartphones in the company’s story and amassed a huge amount of fans. Following this, Pete Lau, the CEO of OnePlus, has also revealed that there are still active users of the original OnePlus One. 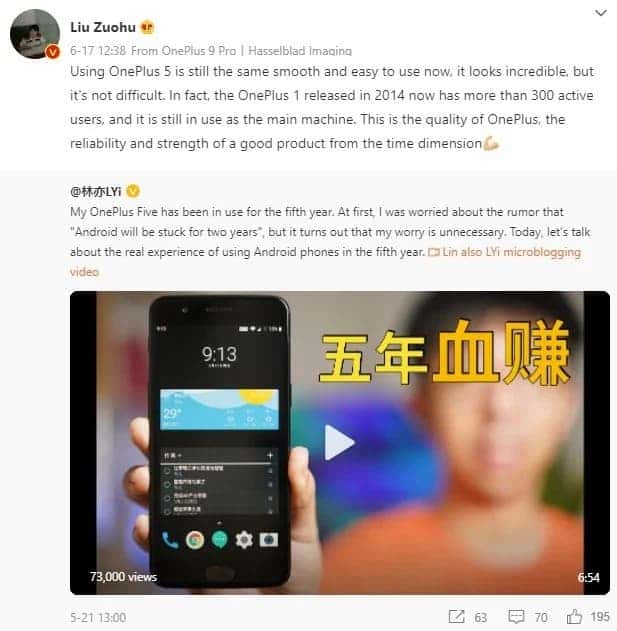 There are still 300 active users of the OnePlus One

The co-found had revealed this interesting detail in direct response to a Weibo user who made a video talking about his experience with the OnePlus 5. According to the individual, even though he has been using the OnePlus 5 for four years, the experience is still smooth. Pete Lau, then, commented on the user’s post and revealed that even the OnePlus One, the company’s first smartphone, released in June 2014, has around 300 active users.

Of course, this is just an approximate number, there is a high chance there is a lot more devices still in use out there. Of course, most of them are running a custom ROM. This means that they can no longer be recognized by OnePlus as active devices, but in counterpart, they are able to run modern Android versions without any hassle.

For more than seven years, we believe that users had to do wonders to keep their One in a working state. There are several issues that can happen with the years such as malfunctioning batteries and so on. Do you own an old smartphone like the One? Leave a comment below and say what is the big challenge in owning an old smartphone.

OnePlus 10 Pro is confirmed to launch in India this spring