Samsung is gearing up to introduce a new smartphone dubbed Galaxy F22. According to rumors, the device should be launched initially in India. The market has been one of the key markets for the F-series that does not have the same availability as the Galaxy A or M series smartphones. The Galaxy F22 has visited multiple certification websites recently. Now, a new report from IndiaTV suggests that the Galaxy F22 will reach the Indian market in the second week of July. In addition, the device has passed by Google Play Console.

According to the report, the Galaxy F22 will reach the market in the second week of July. The device will come with a price tag below INR 15,000. It will be sold through the Flipkart platform just like other F-series smartphones. According to rumors, it will draw its powers from a 6,000mAh battery. However, there are some reports suggesting that this is a rebranded Galaxy A22. This won’t be the first time that Samsung decides to go with a rebranding route.

The company will reveal more details about the smartphone in the coming weeks. Meanwhile, the smartphone’s specifications have leaked via the Google Play Console website. The handset will feature a MediaTek Helio G80 SoC with 4 GB of RAM and Android 11 OS. The Helio G80 carries two Cortex-A75 cores clocked at up to 2.2GHz and six power-efficient ARM Cortex-A55 cores clocked at up to 1.8 GHz. The SoC is paired with a Mali G52 GPU under the hood. It’s not the most powerful out there, but the game can even run some popular games with medium settings. The variant listed on the Google Play Listing runs Android 11-based One UI 3.0 straight out of the box which hardly is a surprise right now. 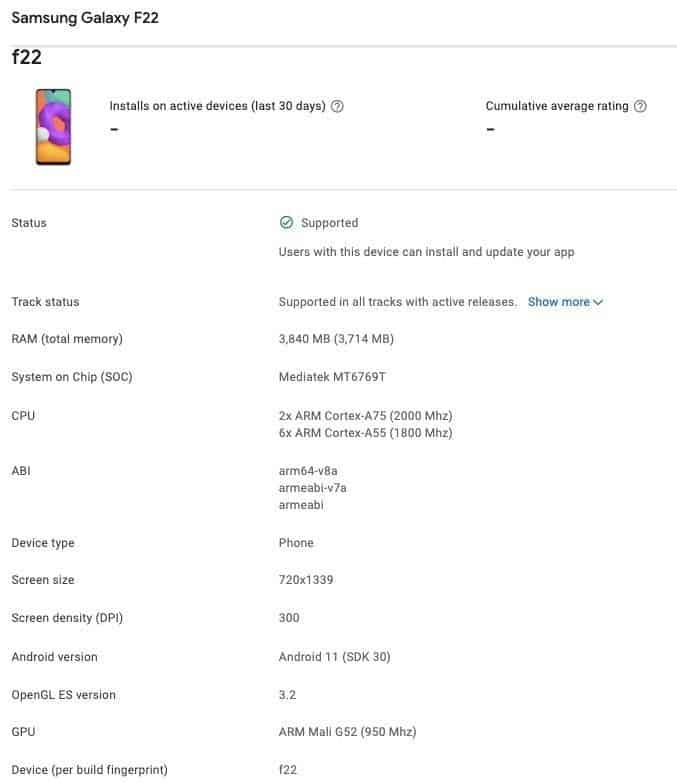 In terms of optics, the new smartphone will have a 6.4-inch AMOLED display with an HD+ resolution of 1,400 x 720 pixels. Thankfully it will also have 90Hz refresh rate support. The smartphone will also pack a Quad-Camera setup. It comprises a 48 MP camera, and other three camera sensors. There is an 8 MP ultrawide camera, a 2 MP depth-sensing module, and a 2 MP macro unit. The device also has Bluetooth 5.0 with LE and Dual-Band Wi-Fi.

We are curious to see if the Galaxy F22 will manage to become a hit in the Indian market. After all, the competition in this segment is growing exponentially. Especially with the arrival of cheap 5G smartphones.